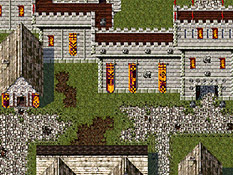 Willendorf appeared in Blood Omen. It was the kingdom of King Ottmar, consisting of a large castle and walled city (surrounded by the Lake of Serenity) and a big township to the east.

The city was wealthy and housed the Library of Willendorf, but only people of noble birth were allowed through the city gates. Kain was unable to enter until he had acquired his Beguile Form: a spell that allowed him to hide his vampire nature, but still appear as the nobleman he was. Kain gained this spell from the Provincial Mines; also owned by Willendorf, and a source of their riches.[1,2]

Ariel told Kain of the Legions of the Nemesis. This brutal, destructive army had already marched through "so many cities", and would inevitably threaten Willendorf. She said Kain "must rally the forces of Willendorf" as they were "the last hope of Nosgoth". This echoed what Kain had heard earlier from the Oracle of Nosgoth. Unfortunately Willendorf was in no state to fight. Kain found Ottmar in mourning for his daughter; a broken man. The Army of the Last Hope - the "proud militia" of kingdom - was scattered, searching for Elzevir the Dollmaker. Ottmar was so desperate that he offered his kingdom to whoever could save his child. Kain noted that the people of Willendorf "worshipped him, even in his weakness".[3,4,5,6,7]

With Ottmar's death, presumably the Princess of Willendorf would have briefly become Queen until the Nemesis seized it. Of course, Kain's tampering with history - his murder of William the Just - ultimately impacted these events. It is unclear what happened to Willendorf on the alternative timeline created by William's assassination, and what became of the kingdom when the Sarafan Lord, and later Kain, rose to power.

Coorhagen was apparently loyal to King Ottmar and Willendorf, as the lion sigil could be seen on many wall-hung tapestries there, and Kain himself said the "Lion Throne had once held [his] allegiance".[11]