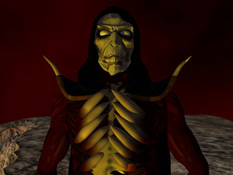 Mortanius the Necromancer first appeared in Blood Omen. He was the Guardian of the Pillar of Death - one of the Circle of Nine - and as such, he had a certain amount of influence over the grave and the spirits of the dead.

According to the 'Character Biographies' page of the Silicon Knights Blood Omen FAQ he was arguably 'the most potent wizard in all of Nosgoth', and his power had 'accumulated over the centuries'. When Malek failed to protect the Circle of Nine from Vorador - centuries before Kain's birth - it was Mortanius who carried out his punishment. It was Mortanius' magic that fused Malek's soul eternally to his armour.[1,2]

Despite the potent magic wielded by the Necromancer, it seemed he was a just individual who tried to act in the best interests of Nosgoth. The 'Character Biographies' page of the Silicon Knights Blood Omen FAQ says 'His power is tempered with mercy and judgment'. However, his mind was not always his own. The Dark Entity possessed him, and used him as a tool for bringing down the Circle. Controlled in this fashion, Mortanius murdered Ariel, which in turn led to the Nupraptor's corruption of the Pillars.[1,3,4]

At times Mortanius was able to fight the Dark Entity's influence, and assert his own will instead. During these interludes, he tried to correct the imbalance he had caused by murdering Ariel. Thirty years after her assassination, and the corruption of the Pillars, he had the nobleman Kain killed outside a tavern. In the Underworld, he offered Kain an opportunity to avenge himself. Resurrecting him as a vampire, Mortanius guided Kain to purge the Circle of its deranged Guardians, knowing that eventually his 'undead son' would come for him.[4,5,6,7] 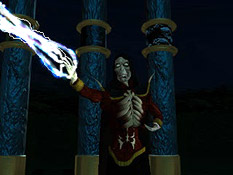 Kain dutifully hunted the Guardians, and - at Mortanius' invitation - he returned to the Pillars after beheading Moebius. Anarcrothe and Mortanius were there, arguing about him. Anarcrothe knew Mortanius was responsible for Kain's murder, vampiric rebirth and subsequent slaughter of the Circle members. Anarcrothe did not accept what Mortanius believed: that it was necessary for the good of Nosgoth. The Alchemist believed his powers were his to use as he desired. The fate of Nosgoth was unimportant; he owed the land nothing. Mortanius and Anarcrothe had a brief fight, each directing their magic against the other. Mortanius killed Anarcrothe with ease, impaling him with a lightning-like attack, slamming him against a pillar and then summoning ghosts to break the Alchemist's back.[6]

The Necromancer welcomed Kain when he noticed him watching. Mortanius anticipated and wanted his own demise, but he didn't make it too easy for Kain. He raised skeletons and other creatures to battle for him. When Mortanius eventually died, the Dark Entity revealed itself, twisting the Necromancer's body into a demonic-looking form. The Dark Entity taunted Kain before they fought. Kain emerged victorious, but he knew who he was now: the Guardian of Balance. He had to make his decision. He rejected the idea of self-sacrifice to restore Nosgoth's Balance.[8,9,10] 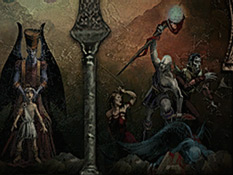 Mortanius' history and motivations were explored further in Defiance. A mural revealed that the Ancient Vampires - trying to maintain the integrity of the Pillars' sorcery (the Binding) - found and looked after the human successors of their own fallen Guardians, abducting them if necessary. When the successors came of age, they would be turned into vampires too. Apparently Mortanius had been unwilling to submit to this fate. With Moebius, he led a human revolt against the Ancient Vampires.[11]

In Defiance, Raziel found Mortanius in the Blood Omen era. He was leading the Cenobites in their worship of Hash'ak'gik in the Avernus Catacombs. 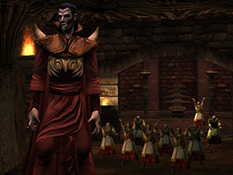 After killing Hash'ak'gik/Turel, Raziel had the chance to speak with the Necromancer in person. As Raziel approached him, Mortanius was apparently talking to the fledgling vampire Kain - through some magic - giving him the invitation to the Pillars "grand finale". That business concluded, Mortanius commented that "the Binding must be fragile indeed" if Raziel had "come out into the open, at last". He told Raziel that he was too late for the victory he sought. It seemed Mortanius believed Raziel was the Adversary (Hylden) Hero, whom the Ancient Vampires had schooled him about, centuries ago.[7,12] 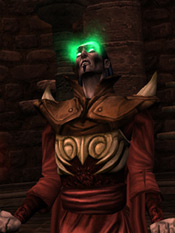 The Dark Entity asserts itself

Mortanius admitted that he and Moebius had been wrong to overthrow the Ancient Vampires. He had thought the Ancients "were simply a plague upon mankind" but he had since learned they were right, and the Pillars were holding back something far worse. His act of atonement was to create the Scion of Balance - whom he thought was also the Vampire Hero - using the Heart of Darkness. He believed the Scion, Kain, would destroy the Hylden's hero, return the Pillars to Vampire guardianship, and ensure the Hylden were banished forever. Mortanius, like Janos Audron, seemed to have interpreted the Ancient Vampires' prophesies slightly incorrectly. Kain was not the Vampire hero at all; actually Raziel was both champions depicted in the murals, Hylden and Vampire.[12,13]

Throughout the conversation, Mortanius was in constant conflict with the Dark Entity possessing him. Twice, the Dark Entity managed to seize control and speak directly to Raziel through the Necromancer. He said that Mortanius was weakening - as all the Hylden's human hosts did - but they would soon have a stronger vessel to replace him. Until then, the Dark Entity had to be careful not to "break him". Mortanius knew that he did not have long to live. After the second emergence of the Dark Entity, he vanished. Presumably he went to confront Anarcrothe and the fledgling Kain at the Pillars before his body gave up entirely. It can be assumed that these events progressed exactly as in Blood Omen, but it is now known that Kain did not destroy the Dark Entity then. In Defiance, after abandoning Mortanius' flesh, the Dark Entity possessed the recently-resurrected Janos Audron instead.[12]

Mortanius' possession by the the Dark Entity may have been partly his own doing. The first Defiance Q&A page

at The Lost Worlds says that both 'Azimuth and Mortanius served the Hylden (implied plural) who they knew as Hash'ak'gik'. Through this servitude, the Necromancer may have made himself vulnerable to possession by the Dark Entity, or even invited it without understanding its nature.[13]

Also, until Defiance, it was assumed that Mortanius' skeletal appearance in Blood Omen was his natural form, a consequence of his Guardianship of the Death Pillar. This was supported by the 'Character Biographies' page of the Silicon Knights Blood Omen FAQ, which said 'the toils of his magical practices with the dead have made Mortanius little more than a skin and bone husk whose fragility belies his ultimate power'. In Defiance, this was apparently not the case. He still looked very human, but he could change his appearance by summoning a magical Death's Head mask. He was using this mask when Raziel first saw him, and presumably throughout the events of Blood Omen.[1,13]

Although it wasn't shown in Defiance - probably because it would be too gory - Hash'ak'gik/Turel was used to receiving sacrifice victims with their throats cut. Mortanius may have carried out this preparation personally, but we cannot be sure.[15]

It can be noted that the suffix '-mancy' means 'divination'. Mortanius' title of 'Necromancer', taken literally, implies that he communicated with the dead in order to predict the future. While this is possible, there's never been any evidence of it in the series, and it would encroach uncomfortably into Moebius' sphere of magic. Also, it was implied in Defiance that creating vampires was not one of Mortanius' standard abilities as Death Guardian. Fans previously attributed that skill to him, looking only at Blood Omen, but Defiance showed he needed the Heart of Darkness to pull it off in Kain's case. This is a bit inconclusive, because Kain was supposed to be something more special than your garden-variety undead. Mortanius might have been entirely capable of creating vampires by snaring souls from the Underworld - much in the same way Kain did later - but Kain was destined to be the Scion of Balance, and therefore required more work. To be fair, given Mortanius' personal history with vampires, he would have been unlikely to create any even if he could.

Finally, Prima's Official Blood Omen Strategy Guide and Blood Omen's Unused Dialogue suggest a slightly different ending may have been intended for that game, where Mortanius was not the puppet of an external will - the Dark Entity - but was fully aware and in control of his actions when he murdered Ariel:[16,17]

"No, Anarcrothe. I am its savior! The Circle was damned before my deeds. At the onset I blamed Ariel. She was the Balance of the Circle. She and Nupraptor with their love, threatened us all. With their union, how could there be Balance? Yes, I killed her, but Nupraptor's vengeance, for me, 'twas both blessing and curse. His pain split my soul in two. Part of me shared his anguish, a grief so fierce, it would destroy the world - and yet the other, found revelation... For the first time, through the haze of madness, I saw truth. The problem did not lie in one of us - it lay in us all! We are relics, old friend, remnants of an era long gone, seeking to play gods in a world that no longer needs us. Our deaths shall resurrect the world."[17]