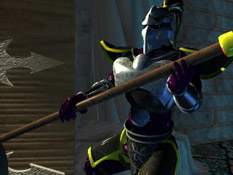 Five hundred years before the events of Blood Omen, the Sarafan were powerful, and Malek led them to many victories. He was thought to be a ruthless and cold-blooded murderer; particularly by the vampires he hunted. His helmet was 'crowned with a plume of braided hair, torn from the scalps of his victims'.[1,2,3] 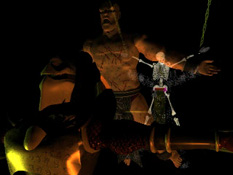 Malek's soul being fused to his armour

Unbeknownst to Malek, the success of the Vampire Purge would lead to his downfall. Vorador attacked the Circle of Nine for supporting the Sarafan's crusade. Malek did not get there in time to save them, and six Guardians perished before he arrived. He fought with Vorador, but the vampire left him defeated and shamed. Mortanius, the Guardian of the Pillar of Death, punished Malek on behalf of the Circle. He fused Malek's soul to his armour, depriving him of his body, humanity and all "pleasures of the flesh". Over the next five centuries, Malek's wrath continued to grow against Vorador, who had damned him to his pitiful fate.[1,3,4,5]

When Kain became a vampire in Blood Omen, the Sarafan order had almost disappeared. Malek was the last of the Sarafan sorcerer-priests. Kain met the disembodied Paladin when he infiltrated Nupraptor's Retreat, and although Nupraptor promptly dismissed Malek, Kain realized he was a formidable foe.[6,7] 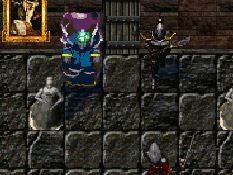 Ariel told Kain the Circle would not fall until Malek was destroyed, so Kain travelled to Malek's Bastion to confront him properly. Unfortunately, Malek proved far too resilient for him - Kain could not inflict any permanent damage whatsoever - and Kain was forced to leave or be killed when Malek unleashed a devastating wall-of-energy attack.[8]

Kain went to the Oracle of Nosgoth for advice. The old soothsayer (actually Moebius) told him about Malek's embarrassing past, blaming Malek's 'vanity' for his failing. Malek had not allowed another Circle member to fall since, or so the Oracle said. He neglected to mention Ariel and Nupraptor's deaths for some reason, presumably not counting murders committed within the Circle against the Paladin. Although Kain didn't know it yet, he was the new Guardian of Balance, and Ariel had been murdered by Mortanius (under the influence of the Dark Entity).[6] 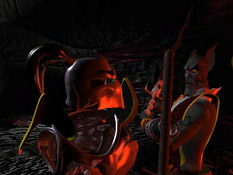 On the Oracle's advice, Kain visited Vorador to request his help against Malek. The older vampire was amused by Kain, and gave him his signet ring, allowing Kain to call on Vorador in a time of need.[9]

Kain continued to Dark Eden and found Bane, DeJoule and Anarcrothe working together. Anarcrothe summoned Malek, and then vanished, leaving the other two behind. In response, Kain called upon Vorador. Suddenly Malek was faced by his old adversary. They exchanged words insultingly, and then they fought while Kain pursued Bane and DeJoule outside. Kain returned victorious and saw that Vorador had disappeared again, but not before laying the Paladin to rest once and for all. Kain collected Malek's helmet from the lifeless armour and took it back to the Pillar of Conflict.[10] 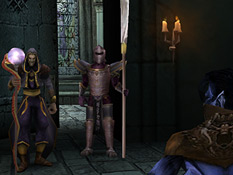 In Soul Reaver 2, Raziel encountered Malek in the Sarafan Stronghold. After following the Sarafan who murdered Janos back from Janos' Retreat, Raziel was trapped in a room by Moebius and Malek. Malek was clearly subservient to the Time Streamer - he referred to him as Lord Moebius - and followed his commands.[11]

Raziel saw that Malek's vanity had nothing to do with his failure to protect the Circle. Vorador arrived at the Stronghold while Raziel was being detained, and began his massacre. Malek heard the cries for help, but Moebius would not allow him to leave until Raziel took up the Reaver. It was Moebius' fault that Malek was unable to get there quickly enough to save them.[11]

Malek in Soul Reaver and Defiance

Aside from these appearances, Malek had small mentions in Soul Reaver and Defiance. In Soul Reaver, Malek's name was carved in the Tomb of the Sarafan.

In Defiance, Kain had to return a sword and shield to the Malek statue in the Sarafan Stronghold's courtyard. He found it a distasteful task, but it was necessary. Pickier Legacy of Kain fans might assume the statue was made for the Sarafan by a sculptor who didn't really know their subject: Malek used a polearm; he's never been seen using a sword, or shield for that matter.[12,13]

Malek's strange deferral to Moebius in Soul Reaver 2 might be an indication that he, like Kain, remained ignorant of his Guardianship into adulthood. Perhaps no one ever told him, because he was more useful as an unquestioning servant of the Circle, than as a questioning 'equal', upsetting the status quo. The 'Miscellaneous Q&A' page of the Silicon Knights Blood Omen FAQ says: 'Originally "recruited" to protect the Circle, he came to embody the spirit of conflict, and became that pillar's "representative" in Nosgoth.'[14]

We know from Janos' comments in Soul Reaver 2 that Malek could not become the Conflict Guardian; he had to have been born into the position as "the Pillars choose their guardians from birth". The theory of ignorance seems to bridge both scenarios.[15]

A theory: Malek was always the Guardian of Conflict, but maybe he didn't gain the full responsibilities and knowledge of his role until a point in his life where he was already behaving like a Conflict Guardian. Some fans have said that as leader of the Sarafan, Malek must have known about his birthright: how else could he command the order? However, Raziel was apparently nothing special as a human, yet he reached the lofty rank of head 'Sarafan Inquisitor'. It seems equally possible for Malek to have attained his rank through his battle skills alone. Malek's magical abilities would not have instantly marked him as a Guardian either. Nosgoth was full of sorcerers of varying power.[16]

At some point during the development of Blood Omen, Malek was going to be named 'Guillaume'.[17]