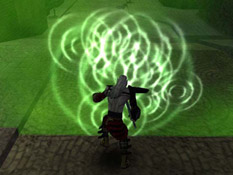 Ward Gates appeared in Blood Omen 2. They were devices used by the Sarafan in their ceaseless war against the vampires.

Powered by (and likely formed from) green Glyph Energy [BO2], they prevented vampires moving freely through Meridian's streets, although they would not stop humans from passing through. If a vampire touched an activated Ward Gate, it would repel them and burn them as if it was a wall of fire.[1]

Kain first saw a Ward Gate in the Slums, while Umah was training him. Later Kain was separated from her when a Glyph Guard turned on a Ward Gate between them. Kain had to turn off or avoid many Ward Gates while he was travelling through Meridian. Notably, he had to kill a nobleman called Artemis in the Sarafan Keep before a woman would open a Ward Gate for him.