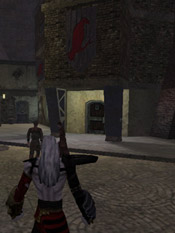 Outside the Red Raven pub 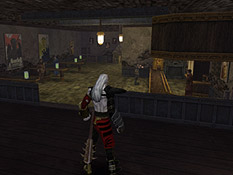 Inside the Red Raven pub

The Red Raven Pub featured in Blood Omen 2; it was located in the Lower City region of Meridian. Umah left Kain alone in the Lower City, forcing him to find the Cabal's Sanctuary by himself while she visited the Industrial Quarter. She instructed him to speak to the Tapster of the Red Raven for more information.[1]

The pub was fairly large, and a meeting place for the common people. It had a couple of red and white dartboards, a fireplace and large posters on the left wall. Small Glyph Energy [BO2] lamps were on the tables.

It was possible for Kain to overhear conversations between some of the patrons. They discussed the mysterious Glyphwrights and other day-to-day issues of living under Sarafan rule: people disappearing and rising taxes.[2]

A short way into the Upper City, Kain could eavesdrop on another interesting conversation linked to the Red Raven. One Thug was telling another about a recent job he had been paid to do.

The Thug spoke about a man - a gentry 'Swell' who "didn't belong there" - approaching him in the pub. This man, apparently suspecting his wife of being unfaithful, offered the Thug a 'tenner' to kill the person she met of an evening. The Thug obliged - not being "one to spit at a tenner" - and murdered a priest; the wife was actually going to the Upper City cathedral to pray nightly for her missing son. Having performed this murder, and having seen the gentry couple's home, the Thug now planned to rob it with his accomplice.[3]