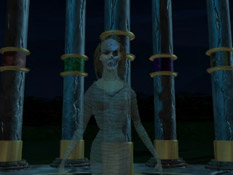 Ariel at the Pillars in Blood Omen

In life, Ariel was one of the Circle of Nine: the Guardian of the Pillar of Balance. A beautiful and powerful sorceress, she was the lover of Nupraptor the Mentalist. Her role was a regulatory one, and her magic influenced others' in Nosgoth.[1]

Ariel was murdered by Mortanius. The Necromancer - under the control of the Dark Entity - stabbed her. This act initiated the corruption of the Pillars of Nosgoth. Nupraptor, overcome with grief, and suspicious of his fellow Guardians, plunged into madness. He unleashed a devastating psychic attack on the Circle, infecting them with his insanity. As the Guardians became deranged, their Pillars began to crack and collapse.[1,2,3]

Death was not the end for Ariel; her former role bound her to the Pillars. She was trapped as a spirit, unable to leave the columns. The left side of her face appeared greatly decayed; it was stripped of flesh and her skull was exposed. From her prison, she could only watch as her beloved Nupraptor suffered and dragged Nosgoth into ruin.[1] 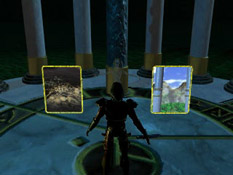 In Blood Omen, thirty years after her murder, Ariel encountered her successor: Kain. Kain was looking for a cure to his vampiric curse, and although Ariel didn't promise him one - only "release" - she persuaded him purge the Circle. She aided and guided Kain in his quest to slay the other Guardians, never enlightening him of his true destiny.[4,5]

Kain only learnt that he was the new Guardian of Balance after he defeated The Dark Entity at the Pillars. Ariel presented him with a choice: kill himself and restore Nosgoth's Balance, or survive and preside over Nosgoth in its decay. Kain chose the latter option, preferring to survive as a vampire with the power he had gained, rather than destroying himself to be rid of the affliction.[6,7] 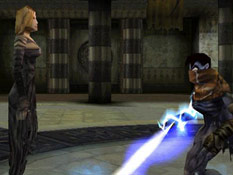 Ariel as Raziel saw her in Soul Reaver

Centuries later, when Kain set his throne at the base of the Balance Pillar, and built the Sanctuary of the Clans around the Pillars' ruins, Ariel was still there. And long after that, when Raziel returned to the Pillars as a Reaver of Souls, intent on killing Kain, Ariel offered her wisdom to him. After that, throughout Soul Reaver, she was available at the Pillars to dispense advice. She gave Raziel enigmatic clues to find Kain and his mutated brethren.[7]

Raziel met Ariel again in Soul Reaver 2, but he didn't show her the respect he had previously. He was stranded in time, one hundred years after Kain abandoned his restoration of the Pillars in Blood Omen.[8] 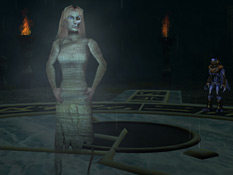 Ariel was lamenting her fate, bitter at Kain for turning his back on the Pillars and her by continuing to live. Consciously he had kept her trapped, and her wrath was directed at him alone. Raziel found himself debating Kain's guilt with her, even defending his decision to a point. His arguement was partly based on the conversation he had with Kain at the Pillars, earlier in the game.[4,9]

Raziel became rather bullish, taunting Ariel with the possibility that Balance might never be restored, and that her imprisonment could be eternal. She fled into the Spectral Realm to get away from him, but he followed, and continued to torment her until he tired of it. Raziel mentioned how Ariel had volunteered Nupraptor as Kain's first Guardian target, cruelly implying that she hadn't cared about the Mentalist at all.[9]

Ariel featured prominently in Defiance, and again, it was Raziel who talked to her. He emerged from the Underworld and realized he was in the Blood Omen era. He overheard some Vampire Hunters discussing a ghost haunting the Pillars, and decided to visit Ariel for guidance.[10] 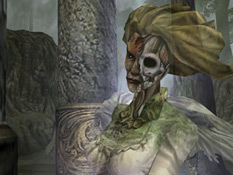 Ariel at the Pillars in Defiance

When he reached the Pillars, he found Ariel confident and certain that the fledgling vampire Kain - whom she was currently aiding - would restore Balance. She appeared to have some knowledge of the Hylden, and she accused Raziel of serving her murderer. She, like Mortanius later, seemed to think he was a Hylden. She flatly refused to listen when he warned that Kain would disappoint her. She said her faith sustained her.[11]

Raziel had recently learned that Vorador was the maker of the Reaver, and as the vampire was still alive in this time, Raziel hoped to speak with him. He asked Ariel where Vorador might be, and she told him, commenting that Vorador was the last of his kind now, except Kain. She was happy for Raziel and Vorador to "molder there together" until the end came. She had no concern for either of them.[11] 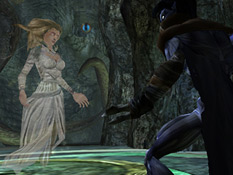 Ariel at the Spirit Forge in Defiance

Ariel finally got the release she sought from the Pillars when Raziel activated the Spirit Forge, near the end of Defiance. She appeared to him, restored to her former beauty, and told him that the forge summoned "the spirit of every Balance Guardian to itself, for this final purpose". She was enlightened; no longer blinded by her own prejudices and hatred. The "veil" was lifted from her sight, and her soul - united with the souls of her predecessors - was needed to imbue the Reaver with Spirit, purifying it. It was the final destiny of the Balance Guardians, the reason they were called.[12]

Raziel took Ariel's hand and she was absorbed into the wraith-blade. She faded, gently telling Raziel that he must "unite what has been set asunder" to arm Kain "for his true endeavor". Later, these words helped Raziel to realize his own purpose, and prompted him to be willingly drawn into the physical Reaver blade.[12]

There is a common belief amongst Legacy of Kain fans that Ariel was drawn back in time from the post-Soul Reaver era, and it was this post-Soul Reaver incarnation that was absorbed into the Reaver. They argue that Raziel has to encounter Ariel in Soul Reaver and Soul Reaver 2 - meetings that chronologically occur after the activation of the Spirit Forge - therefore her Blood Omen/Defiance incarnation must still be at the Pillars.

At some point during the development of Blood Omen, Ariel was going to be named 'Adonathiel'.[13]

contains some concept art of Ariel.[14]