Janos' Retreat - Janos Audron's home, and where he kept the Reaver - was located in the mountains north of Uschtenheim. It was a location Raziel visited in Soul Reaver 2.[1]

In Soul Reaver 2, Raziel wanted to meet Janos. He had found murals of the Reaver, the winged race, and the Pillars, and Vorador had told him that Janos - the last of the Ancients - would be able to answer Raziel's questions. Unfortunately, Janos had been killed five hundred years before the events of Blood Omen.[2] 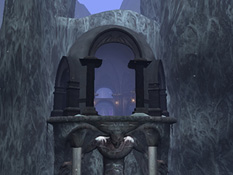 The exterior of the retreat as it was during Janos' lifetime

When Raziel first located the retreat in Soul Reaver 2, it was collapsed, as if from "some ancient cataclysm". The carved figure under the balcony bore wings like the Ancient Vampires depicted in the murals of the Reaver Forges. Raziel knew that Janos had been dead for around six hundred years by this time, and there was little knowledge to be gained from his former abode.[3]

Kain arrived while Raziel was gazing at the ruined building. He had followed Raziel through time, and offered a warning to him about the forces mobilizing against them: whatever Raziel thought, their enemies assumed that he and Kain were allies. Kain vanished, leaving Raziel to find his own route back into the past era when Janos Audron still lived.[3] 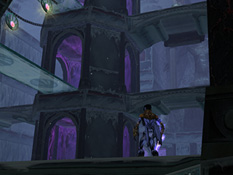 The maze of walkways inside the retreat

Using the Time Streaming Device in the Termogent Forest Swamp, Raziel reached the period of history five hundred years before the events of Blood Omen. He arrived back at Janos' Retreat to find the structure intact: an encouraging sign. He entered using his unique abilities and made himself a path to Janos' chamber, through the huge hollow interior of the mountain.[4,5] 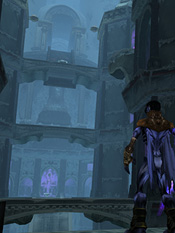 The maze of walkways inside the retreat

The mountain contained ice-floored corridors and a maze of walkways and barriers, several storeys high. Janos' library-chamber was at the top. While a being gifted with flight - like Janos himself - could easily bypass them all, Raziel had to negotiate the maze on foot. He had to transfer blood between huge bowls set on different levels, creating stairways and balconies where previously there had been none. Raziel also had to use the Reaver, enhanced with elemental Air, Light or Dark, in several places. Only Raziel could have passed these elaborate defences the first time, but once they were breached, anyone could follow in his footsteps. 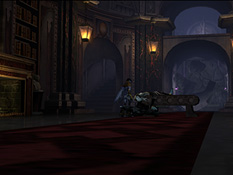 Inside the library-chamber, just after Janos' death

Raziel met with Janos in the library-chamber, and they talked for a while about the Pillars, the Reaver and the vampire race. Janos showed Raziel that the Reaver was kept in the retreat, and Raziel learned that Janos was charged with its protection. However, they were soon interrupted.[4]

Raziel had provided a route for the Sarafan to infiltrate the mountain aerie. Janos used magic to teleport Raziel into the safety of an adjacent chamber: the Fire Forge. Raziel could do nothing to help Janos until he forged the wraith-blade, as the door between the two rooms was sealed with an elemental lock. He finally opened the door and re-entered the library-chamber, but he was too late to prevent Janos' murder. With Janos' death, the aerie collapsed. Raziel and the Sarafan left unharmed - the Sarafan taking the stolen Reaver with them - but the ruined structure was to be Janos' tomb.[6,7]

Some time after Janos' murder, Vorador must have recovered his body. In Defiance, Raziel saw that Vorador kept Janos' corpse in a crypt within his estate.

It's unclear if Janos consciously triggered the collapse of the retreat as he was dying (as the Sarafan Dumah seemed to think). It seems more likely that pre-existing sorcery had made the stability of the structure dependant on Janos' own life; if he was not alive to guard the Reaver, it would be buried in rubble, and hopefully kept safe that way. He was probably insuring against coming to harm outside the retreat as, until Raziel showed up, the mountain's defenses were sound.[7]