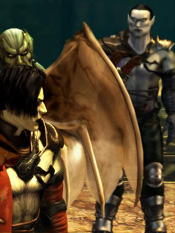 Vampire lieutenant Dumah (in the background)

Dumah first appeared in Soul Reaver. He was one of Kain's six vampire lieutenants, and therefore a member of the Council. He was the patriarch of the Dumahim clan.[1,2]

Dumah was seen standing in the Sanctuary of the Clans at the start of Soul Reaver's opening FMV (Full Motion Video). He looked strongly-built, and his black hair was slicked back and pulled into a small, high ponytail. His shoulder cape was purple, and he stood to the right of Kain's throne - in the position furthest away - next to Rahab.

Raziel arrived at the the Sanctuary of the Clans, and presented his newly-grown wings to Kain and his fellow lieutenants. Kain ripped the bones from Raziel's wings, and ordered Raziel's execution. It was Dumah (along with Turel) who carried Raziel to the Abyss and threw him in on Kain's command.[3]

When Raziel returned from the Abyss, he found that "centuries had apparently passed". He hunted all of the lieutenants - his former brethren - to avenge himself. They had all abandoned him to Kain's unjust will, and none had protested against the irrational execution sentence. It seemed that Raziel deemed Dumah and Turel especially guilty for their active involvement. Exploring the Tomb of the Sarafan, Raziel was shocked to learn of their shared Sarafan heritage, but the revelation did not blunt his need for retribution.[4,5,6] 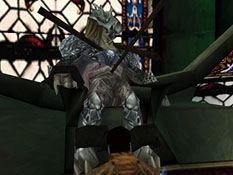 The evolved vampire lieutenant Dumah, staked and bound to his throne

When Raziel arrived at Dumah's territory (the Ruined City of the Dumahim), he was surprised to see it littered with decomposing vampire corpses. Dumah's arrogance had caused him to overlook the small threat posed by Nosgoth's humans. At some point, they had stormed his city and slaughtered much of his clan. Raziel saw that the humans had already exacted some measure of vengeance for him: Dumah himself had been humiliated, having been 'killed' by the human invaders. He had been left like a "stuck pig", bound to his throne and impaled with three huge stakes.[7]

Dumah's soul still existed in the Spectral Realm, remaining in the throne room near his corpse. Raziel could speak with him there, and even try to fight him there, although his efforts would be in vain. Dumah's soul had the shape of his body (which had evolved in the centuries since Raziel's execution), and was fully conscious and self-aware.[7,5] 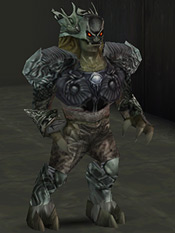 Dumah could only be killed properly in the Material Realm, so Raziel reanimated him by removing the stakes from his body. Dumah thanked his fallen sibling. Dumah's ego was evident: he believed that his time in limbo had honed his strength. He claimed to be more powerful than Kain.[3,7]

Physically, Dumah had evolved into an armoured titan (he also appeared to wear some metal armour, including a helmet and breastplate). He was around twice Raziel's height. Having spent so long in the Spectral Realm, he was technically a Revived Vampire: a Vampire Wraith, who upon re-inhabiting its body, retains advantages it gained in the Spectral Realm. Dumah had their long-range soul-sucking ability. Chasing Raziel, he also pounded the floor to cause tremors which unbalanced Raziel, and allowed Dumah to catch up with him. Dumah's signature ability was 'Constrict'; this enabled him to "wind a constricting band of spectral energy" around Raziel to stun him.[7]

As Raziel said: "Even the strongest vampire is vulnerable". Raziel led Dumah in a cat-and-mouse pursuit into the ruined city's furnace and incinerated him. Consuming Dumah's soul endowed Raziel with the 'Constrict' ability. It could be used to turn dials, stun enemies or kill humans.[7] 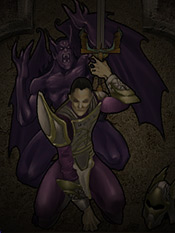 The mural of Sarafan Dumah 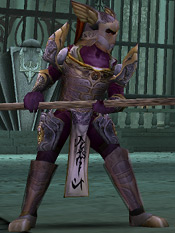 In Soul Reaver 2, Raziel saw the mural commemorating the human Dumah's martyrdom in the Sarafan Stronghold. Dumah was pictured with a purple, demonic creature behind him.[8]

When Raziel travelled back in time to meet Janos Audron, five centuries before the events of Blood Omen, he encountered the living Dumah. Dumah was one of the five Sarafan who broke into Janos' Retreat, murdered him and stole the Reaver. Realising Janos' Retreat was collapsing, it was Dumah who snapped the Sarafan Raziel of out his trance: the head Inquisitor was transfixed, staring at his wraith incarnation. Dumah also carried the Reaver back to the Stronghold.[9,10]

Raziel followed the Sarafan to the Sarafan Stronghold to avenge Janos' death and reclaim the Heart of Darkness. Motivated by grief, anger and self-loathing, he killed them all with the Reaver (which he had found in the stronghold). Dumah was armed with a polearm and paired up with Rahab. Raziel fought and slew them both in the main hall. Dumah was buried in the Tomb of the Sarafan, and approximately a thousand years later, he was resurrected by Kain as a vampire.[10,11]

Raziel did not have the Constrict ability in any game after Soul Reaver, although he retained the abilities gained from Melchiah, Zephon and Rahab, and used them in Soul Reaver 2 and Defiance.

It seems pretty certain that the purple demon shown in Dumah's memorial portrait (in the Sarafan Stronghold) was in fact Raziel. A lack of reliable witnesses to Dumah's death and/or artistic license had distorted Raziel's image.

The Soul Reaver Game Manual (UK and US versions) mentions that some of the Clan Leaders (Kain's vampire lieutenants) had a limited ability to shift between the Material Realm and the Spectral Realm. Dumah was equally as dangerous in both realms, and could appear in the Spectral Realm even after Raziel reanimated him.[2]

Although there is no conclusive evidence, Dumah is commonly believed to be the third lieutenant raised by Kain, after Raziel and Turel. There are a couple of indicators to support this idea. He had the dubious honour of actively participating in Raziel's execution. Also, he was the final 'boss' in Soul Reaver (except Kain), and videogame convention dictates that the strongest enemies are usually faced last.[3]