The Dark Entity first appeared in Blood Omen, where it was possessing Mortanius the Necromancer. It featured in various guises throughout the series, as an antagonist for both Kain and Raziel, and its true identity was revealed:

In Defiance, many Hylden projected their souls into the Material Realm from the Demon Realm where they were imprisoned. This was possible due to decline of the Pillars and the Binding. These 'transient disembodied' Hylden souls invaded and possessed host bodies in the Material Realm. The Dark Entity was a leader of the Hylden, alternatively referred to as the Hylden General (in Blood Omen 2) or the Hylden Lord (in Defiance's cutscene titles). He appeared in Blood Omen 2 as the Sarafan Lord, inhabiting his own, Hylden body.[1,2]

The Dark Entity in Blood Omen 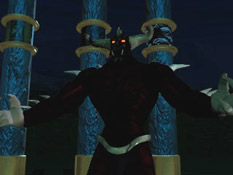 The Dark Entity reshapes Mortanius' flesh into a demonic form

In Blood Omen, Ariel told Kain to "beware the Unspoken", as he was starting his quest to kill the Circle. Throughout the course of that game, and referring to 'Plot' page of the Silicon Knights Blood Omen FAQ, it became apparent to players that this malevolent force - alternatively called the Unspoken, Hash'ak'gik or the Dark Entity - had possessed Mortanius. Under its control, the Necromancer had murdered Ariel.[3,4]

The Dark Entity - as it is most accurately called, based on the later games - had known this act would attack the entire Circle of Nine in one move, initiating the corruption of the Pillars. Ariel's murder drove Nupraptor insane with grief, and he turned his magic on the Circle, infecting them with his madness. Kain, destined to be Ariel's replacement as Balance Guardian, was tainted by Nupraptor's psychic assault from birth.[5]

Mortanius could occasionally free himself from the Dark Entity's influence. During one of these interludes, he had Kain murdered, then brought him back into the world as a vampire. Kain set out to purge the Circle of its corrupted members under the direction of the Mortanius and the spectre of Ariel. At the end of Blood Omen, Kain killed Mortanius at the Pillars. As the Necromancer died, the Dark Entity emerged, deforming Mortanius' flesh into a demonic form, and taunting Kain for being its pawn. Kain protested that he served no-one, and he fought the Dark Entity, eventually beating it.[6,7]

However, despite outward appearances, Kain hadn't destroyed it. As the later games would show, he had only destroyed the remains of Mortanius' body, which had housed the Dark Entity's soul. The Dark Entity found another host...

The Sarafan Lord (The Hylden General) in Blood Omen 2 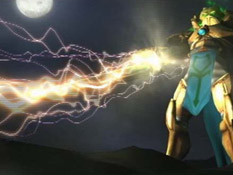 The Sarafan Lord seemed like an entirely new enemy when he was introduced in Blood Omen 2. In fact - as the first Defiance Q&A page

at The Lost Worlds would confirm - he was simply the Dark Entity inhabiting his own, natural Hylden body, clad in golden armour.[2]

Two hundred years after the events of Blood Omen, Kain and his vampire army were defeated by the Sarafan outside of Nosgoth's capital: Meridian. Kain himself was defeated in mortal combat with the Sarafan Lord. The Sarafan Lord was no ordinary warlord: as Kain would eventually discover, he was a Hylden.[8,9]

After the battle, the Sarafan "seized control of all of Nosgoth", "enslaved the humans under their iron rule, and hunted down and destroyed every vampire they could find". Kain spent another two hundred years recovering from his injuries. The Cabal looked after him while he lay comatose. When he woke, they wanted to assist him in destroying the Sarafan Lord, but Kain had to regain his strength before he would be ready for that battle.[9]

The first time their paths crossed, Kain was still far from ready. He was escaping with Umah from the Sarafan Keep when the Sarafan Lord stopped them. Kain was unpleasantly surprised to see that the Lord wielded the Soul Reaver - his sword - and his hunger for vengeance overcame his reason; he wanted to fight there and then. The Sarafan Lord did not see Kain as a real threat, and would have killed him and Umah had she not teleported them away.[10] 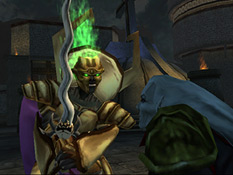 Kain continued his quest against the Sarafan Lord without really understanding who or what he was. The Hylden were long-forgotten as a race. Kain gradually learned about the Hylden, and the Sarafan Lord's agenda, as he travelled in and around Meridian.

Umah told Kain and Vorador about the Nexus Stone. The artefact had been a crucial element in the Sarafan Lord's victory over Kain, as it could protect its wearer from the Soul Reaver. Kain stole it from the Industrial Quarter, and heard about the Device in the process. Destroying the Device temporarily became his priority. He visited the Seer for assistance, but was forced to leave when the Sarafan Lord set fire to her home. Kain then went on to explore the Device and the Eternal Prison. He found two other vampires who had suffered on account of his archenemy; both more so than he. Magnus - Kain's former champion - had been robbed of his mind and sent to the Eternal Prison for trying to assassinate the Sarafan Lord. Janos Audron - the ancient enemy of the Hylden - had been imprisoned within the Device by the Lord, and used to feed the Mass. Kain poisoned the Mass, and rendered the Device useless, freeing Janos.[11,12,13,15]

A history of the Sarafan Lord emerged from what Kain had been told by Umah, the Seer, the Builder and Janos:

In Blood Omen, Kain refused to sacrifice himself to repair the Pillar of Balance. This sealed the Pillars' fate, condemning them to collapse. The dimensional barrier between Nosgoth's Material Realm and the Demon Realm weakened substantially, and the Dark Entity was able to re-enter the Material Realm - body and soul - using the Hylden Gate. He gradually began to increase his power in preparation for a full invasion. He established, or re-populated, a base (the Hylden City), and started to draw other Hylden into Nosgoth's Material Realm with him. However, it was not enough to bring his people through slowly; his aim was to purge the land of all vampires and humans. He had intended to complete and use the Device: the Hylden race's ancient weapon of destruction.[14,15]

The Device was buried beneath Meridian. The Hylden General (as Kain later called him) needed to gain influence over the city's humans before he could get it up and running. At the same time, Kain had been beginning his conquest of Nosgoth. Eventually, his vampire army would have taken the capital. The Hylden General decided to create his own army, exploiting the humans' fear of Kain's forces. He rebuilt the long-defunct Sarafan order, and set himself at its head as the Sarafan Lord. Follwing Kain's defeat, the Sarafan Lord had become a dictator, and over the next two centuries, the Sarafan enforced his brutal regime while hunting and killing the remaining vampires. A few vampires became servants of the Sarafan Lord in order to save themselves. While all this was going on, the Glyph Energy [BO2] networks were being installed as a conduit for the Device.[12,15,9,14]

The Sarafan Lord at the Hylden City

Kain travelled to the Hylden City for his final battle with the Sarafan Lord, carrying the Nexus Stone. Their roles from two centuries ago were reversed as the Lord used the Soul Reaver against him. They fought above the Hylden Gate. Kain dropped the Nexus Stone into the gate, exposing himself to harm, but initiating the gate's closure. With this act, no more Hylden could enter Nosgoth's Material Realm, and once the gate closed completely, all Hylden already in the land would die. Janos arrived to help Kain win, seeking a small measure of revenge for himself against the Lord. He was still weak, however, and the Sarafan Lord held him off easily. He threw Janos through the gate, sealing him in the Demon Realm.[15,16]

Janos' interruption allowed Kain to reclaim the Soul Reaver. With it, he finally killed the Dark Entity/Sarafan Lord. Nosgoth was Kain's for the taking.[16]

The Hylden Lord in Defiance

The Dark Entity asserts itself

Defiance bridged the gap in the storyline between Blood Omen and Blood Omen 2. It showed the Dark Entity's actions following his defeat by Kain at the Pillars, and explained how Janos had become imprisoned in the Device. Defiance dropped the name 'Hylden General', and instead referred to the Dark Entity as the 'Hylden Lord'.

In Defiance, Raziel met the Dark Entity/Hylden Lord in the Avernus Catacombs, speaking through the possessed Mortanius. Raziel addressed him as 'the Unspoken', although in this game it seemed Ariel and Vorador had meant that term to refer to the Hylden race as a whole. Later, Raziel witnessed the collapse of the Pillars from the Vampire Citadel.[17] 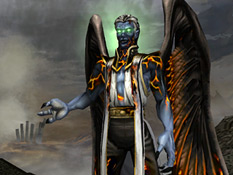 Janos possessed by the Hylden Lord. The ruins of the Pillars of Nosgoth are in the background

The Hylden Lord - having abandoned Mortanius' deformed corpse after the fight with the fledgling vampire Kain - possessed Janos Audron. The Hylden Lord gloated about his victory. He mocked Raziel for providing him with a new host, the blood of their "ancient enemy" (Janos' blood, needed to feed the Mass), and for killing the Scion of Balance to do it. Raziel fought the Hylden Lord, but he couldn't bring himself to murder Janos, so the Lord ultimately triumphed. He destroyed Raziel's physical form, sending him back to the Elder God.[18,19]

The Hylden Lord flew away with Janos' body, thus making the events of Blood Omen 2 possible. According to the second Defiance Q&A page

at The Lost Worlds, the Hylden Lord used Janos' body to open the Hylden Gate. Then, as he was no longer needed as a vessel, Janos was imprisoned in the Device to feed the Mass, and there he remained for around four hundred years, until the younger Kain freed him.[20]

In Defiance, the Hylden Lord mocked Raziel for killing the Scion of Balance, however four hundred years later in Blood Omen 2 he was surprised to see the younger Kain had survived their battle outside Meridian. Surely he should have known that he could not kill the younger Kain, if Raziel was responsible for killing Kain's future incarnation? This is probably an inconsistency; Kain was a vampire wielding the Soul Reaver, and not obviously secretive about being the Guardian of Balance. It seems unlikely that the Lord could remain ignorant of the Scion's identity, allowing him to believe the younger Kain had died at his hands.[18,21]

Also, until the release of Defiance, Hash'ak'gik was commonly regarded as another name of - and probably the real name of - the Dark Entity. This assumption was based on the 'Plot' page of the Silicon Knights Blood Omen FAQ and clues from within Blood Omen. Silicon Knights

(the creators of Blood Omen) apparently intended this to be the case.[4]

However, in Crystal Dynamics

' continuity we don't know that was the Dark Entity's name; it's confusing as he was not one of those Hylden possessing Turel, and therefore not part of the composite 'god' the humans called Hash'ak'gik. The first Defiance Q&A page

at The Lost Worlds tells us that 'Hash'ak'gik' is the name the humans use to refer to their god, and that Azimuth and Mortanius served the Hylden (implied plural), who they knew as Hash'ak'gik. Hash'ak'gik doesn't appear to be the name of any one individual. If the Dark Entity had a personal, Hylden name, it was probably something else, although he may have been the one to initiate contact with the Circle of Nine, and his name could have been subsequently lent to the Avernus god to suggest a continuity of rule to the humans.[2]

Finally, the plans made by the Dark Entity/Hylden Lord and the Hylden throughout the series were designed to destroy the Pillars and wipe out the vampires. These plans were not made blindly; according to second Defiance Q&A page

at The Lost Worlds, 'the Hylden have the ability to see into Nosgoth's timestream, but how they do so hasn't been revealed yet'.[20]