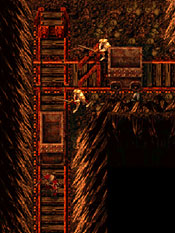 Kain fighting in the mines

The Provincial Mines featured in Blood Omen. They belonged to Willendorf.

Kain learned from the Oracle of Nosgoth and Ariel that Willendorf's army - the Army of the Last Hope - was the only force that might be able to stop the Legions of the Nemesis. Unfortunately, they weren't being mobilized; King Ottmar was "paralyzed by his princess' malaise".[1,2]

Kain needed to see King Ottmar, but only people of noble lineage were able to enter the inner, walled city of Willendorf, where the castle was. Kain's Disguise Form made him appear like a human peasant, and that was not good enough to make the Hope soldiers open the gates for him. He needed a stronger spell, a new form that allowed him to hide his vampire nature, but still appear as the nobleman he was.[3]

Willendorf's people mined for precious metals to the east of their city and township. In their pursuit of these riches, they had uncovered "ancient secrets" too. Exploring the area around Willendorf, Kain recalled hearing about one of these: a tomb that had been uncovered in the Provincial Mines. It contained an "ancient forefather of King Ottmar himself", but more importantly, it housed a special Blood Fountain that would allow Kain to "cast the most noble of illusions, and gain entry to the city of the Mighty Lion".[4]

Kain had to travel through the Provincial Mines, and find and use the Blood Fountain. Once he had drunk from it, he was able to use Beguile Form, an enhanced version of Disguise Form, and gain an audience with Ottmar.