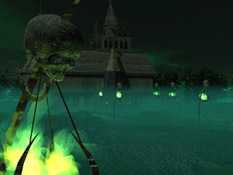 One of the many skull lanterns around Vorador's Mansion

Also known in folklore as will-o'-the-wisp, the term Ignis Fatuus derives from the Latin for 'Foolish Fire'. It is a phosphorescent light that hovers or flits over swampy ground at night, possibly caused by spontaneous combustion of gases emitted by rotting organic matter. Traditionally these lights were thought to mislead travellers, and were sometimes associated with spirits.[1]

Ignis Fatuus was mentioned by the Oracle of Nosgoth in Blood Omen. He told Kain to follow its glow to the Termogent Forest. Much of the forest was waterlogged and swampy. The green swamp gas hung high in the air, and carried by the breeze, it created a clear trail to Vorador's Mansion. It was easy for Kain to spot it in Bat Form, as shown by the bat-flight FMV (Full Motion Video) that played when Kain travelled there.[2]

The footpath to Vorador's Mansion was lit with skull lanterns. Each held a flame of green fire (during the night, they were not alight during the daylight hours). These presumably added to the swamp's emissions, as well as brightening the route. The Oracle claimed the Ignis Fatuus lit the path to Hell. When Kain encountered Vorador, he commented that he had found something worse: a vision of what he was becoming.[2,3]

The skull lanterns appeared again in Soul Reaver 2 and Defiance, as Raziel also visited the Termogent Forest in his travels.