The village of Uschtenheim in Blood Omen

Uschtenheim was a village located to the northeast of Vorador's Mansion and to the northwest of Avernus. It was one of the smallest human settlements in Blood Omen, a bit smaller than Nachtholm, but larger than Ziegsturhl. Kain could visit it - on foot - after meeting with Vorador, if he didn't immediately use his Bat Form to fly to Dark Eden.

In Blood Omen, having reached Uschtenheim, Kain commented that he had "learned much about the legend of Janos Audron" during his travels in Nosgoth. He said this "quaint pastoral village" was the birthplace of Janos, but Kain was possibly incorrect, based on what we know about Janos from the later games.[1]

Kain referred to Janos as "that dark enemy", his choice of words reflecting another aspect of the legend surrounding Janos: that he hunted and fed upon the peasants of Uschtenheim until his execution.[1]

In Soul Reaver 2, Raziel visited Uschtenheim, although the village looked quite different from how it did in Blood Omen. It was fortified: there were lever-operated gates at both the village's exits. The streets were paved and lit by gas lamposts. 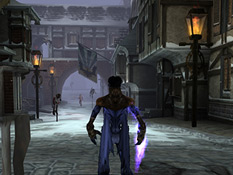 The snow-covered village of Uschtenheim in Soul Reaver 2

Raziel saw Uschtenheim in two different time periods. The first was some one hundred years after the events of Blood Omen. Raziel described "the quaint hamlet of Uschtenheim" as "long abandoned and collapsing into ruin". The only people there were Demon Hunters. Raziel also knew of the village's legendary status as Janos' hunting ground, and reckoned that "if there was any truth to the old tales, the lair of the infamous vampire would not be far away." In fact, Janos had resided north of Uschtenheim, in his mountain aerie. Unfortunately, when Raziel reached Janos' Retreat, it - like the village - was uninhabited and collapsed.[2]

Raziel found a way to travel further back into Nosgoth's past. He passed through Uschtenheim again, now around five hundred years before Kain's vampiric rebirth. The village was snow-covered, and patrolled by the Sarafan. They were occupying most of the surrounding canyons in that era, and mustering their forces in Uschtenheim. Raziel mentioned this to Janos when they met. Janos didn't know what they were planning, but with hindsight, they were likely preparing for their long-awaited infiltration of Janos' aerie, led by the Sarafan Raziel.[3]

In Soul Reaver 2, the Sarafan Stronghold had a stained glass mural depicting Janos terrorising a village and his death at the hands of the Sarafan. With its historical links to Janos, it is almost certain that village was Uschtenheim.