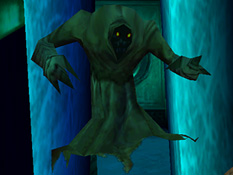 Vampire Wraiths existed in the Spectral Realm. Raziel first encountered one in the Necropolis (Melchiah's territory).

Vampire Wraiths were vampire souls; ones that had lingered in the Spectral Realm long enough for their predatory natures to adapt to it. They had developed shape and form, and they consumed other lost souls as Raziel and the Sluagh did. The Wraiths were more vicious than the Sluagh, always attacking Raziel even if they were alone.[1]

Vampire Wraiths could fly, sweeping through the air, and once a Wraith landed a blow on Raziel, it could devour his soul energy from a distance. To break the connection, Raziel had to strike the Wraith, or retreat a fair distance away from it. If Raziel managed to defeat a Wraith, it would make a strange screaming noise, become transparent, and he could consume it. 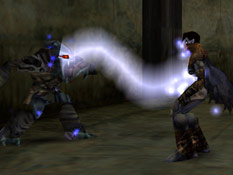 A Revived Vampire devouring Raziel's soul energy from a distance

In Soul Reaver, the separation of a vampire's soul from its flesh was not enough to truly 'kill' it. As long as the soul existed, the body remained intact in the Material Realm. Removing the cause of fatality from the vampire's body (e.g. pulling out the weapon that impaled them) would allow the soul to return, and the corpse would reanimate.

If a Vampire Wraith was allowed to re-enter its body, it became a 'Revived Vampire' - as they are called in the Soul Reaver Game Manual (UK version) - retaining the power to drain Raziel's soul energy after a single hit. Revived Vampires were easy to spot: they were mostly, if not always, adult vampires, and they could be identified by the blue sparks that surrounded them. The Tomb Guardian was a Revived Vampire.[2]

In Soul Reaver, Dumah could also be considered a Revived Vampire. Although he didn't emit the blue sparks, and his disembodied soul didn't look like a typical Vampire Wraith, his soul had spent a long time in the Spectral Realm. He had the long-range soul-sucking ability of a Vampire Wraith/Revived Vampire.

The Defiance Archons had a similar attack to the Vampire Wraiths, also being able to siphon Raziel's soul energy from a distance. However, the Archons were quite different from the Wraiths, being agents of the Elder God.[3]