The Blood Curse (The Dark Gift)

The Blood Curse (The Dark Gift) was the curse the Hylden laid upon the Ancient Vampires. It was the cause of their blood-thirst, immortality and sterility. Later, it was passed to humans.

The Blood Curse (The Dark Gift) in Soul Reaver 2

Early in Soul Reaver 2, Raziel found the Subterranean Pillars Chamber. Inside there were murals that depicted a blue-skinned winged race, who bore some resemblance to Raziel. The murals showed the winged race fighting in a war. They raised the Pillars and "thus defeated their adversaries". Raziel noted the murals also showed them "apparently afflicted with the same blood-thirst [he] had so recently suffered". Raziel was referring to the blood-thirst he had experienced as a vampire, before his execution in the Abyss and his transformation into a devourer of souls.[1,2]

Raziel found other murals in the Reaver Forges. The ones in the Air Forge confirmed that the winged race - "the architects of the Pillars and the creators of the Reaver" - were "Nosgoth's first vampires". According to Raziel: "Their blood thirst appeared to be a curse inflicted upon them by their vanquished enemies."[3]

Raziel travelled back in time, and met Janos Audron, the last of survivor of the winged race. From Janos, Raziel learned that the Pillars summoned humans rather than vampires as Guardians because the Pillars chose their Guardians from birth. Crucially, "vampires [were] no longer born"; they were humans, transformed. It was unclear if a sudden lack of births (presumably a consequence of their enemies' curse) caused the vampire winged race to die out, or if it was just the eventual result of the winged race dying out gradually.[4,5]

The Blood Curse (The Dark Gift) in Defiance

In Defiance, Kain and Raziel found more murals which elaborated on the history of the winged race and their adversaries. It had appeared - from the context of Raziel and Janos' conversation in Soul Reaver 2 - that the winged race were known as Vampires before they were cursed, and the name only became associated with blood-drinking afterwards. This assumption was supported by Raziel's descriptions of those Defiance murals: he only ever referred to the winged race as Vampires, even when murals illustrated a pre-curse event. Kain's exclaimation at the end of Soul Reaver 2 had identified their adversaries as the Hylden.[5,6] 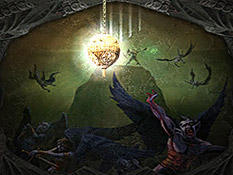 The story of the Blood Curse was clearly explained by the end of the game, building on the details revealed in Soul Reaver 2 and Blood Omen 2:

There was a great war between the Vampires and the Hylden. It lasted for a thousand years until the Vampires banished the Hylden "by powerful magic, sealing them into another plane of existence." This plane was the Demon Realm, as seen in Defiance when Kain found himself there, after his fight with Raziel. The Pillars were raised as "the lock" that bound them ('the Binding').[7,8]

It was a Pyrric victory: the defeated Hylden "retaliated with a terrible curse - afflicting the Vampires with a bloodthirst that turned their once-noble race into ravenous predators". From the murals, Raziel noted the curse "plunged the Vampires into despair, and apparently drove many to madness and self annihilation." Having felt that blood-thirst himself, Raziel wondered what about the curse had devastated them so much that they were driven to suicide.[9]

Despite their horror of the curse, the Vampires had passed it on to humans, Vorador being the first to receive their 'Dark Gift' (from Janos). Raziel believed they had done it in a "desperate bid to preserve their bloodline... for their enemies had cursed them not only with blood-thirst, but with sterility as well". Raziel's assertion clarified why births amongst the Ancient Vampires ceased, causing humans to be summoned as Pillar Guardians in their place.[10]

Kain learned from a mural that the Vampires had apparently "adopted - and, when necessary, abducted - the human Guardians, and made vampires of them when they came of age. Until the humans rebelled against their masters..." Moebius and Mortanius had led the revolt. In a second mural, he also saw the despair of the Ancient Vampires: for them, "the dark gift was clearly a curse, damning them to a kind of spiritual purgatory." This started to explain why so many had taken their own lives.[11,12] 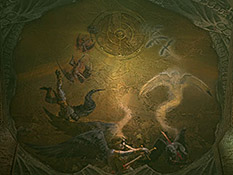 Raziel found the final pieces of the puzzle. He saw murals in the Earth Forge and the Avernus Catacombs which bore a symbol representing the Wheel of Fate. He realised "it was not the blood-thirst, but their immortality that was the true nature of their enemies' curse."

At Raziel's insistence, Janos summerised all of this history when he conversed with Raziel in the Vampire Citadel. Janos justified preserving the Vampire bloodline and passing the curse to the human Guardians as "a necessary evil". He said it was to sustain the Binding, and that the Binding was decaying while the Pillars were under human Guardianship. The banished Hylden were "scratching to gain a foothold back into this world." The Revenants in Defiance - and the Hylden Lord's possession of Mortanius - were signs that the Binding was failing, but whether that was strictly due to the Circle of Nine's humanity is open to debate.[16]

The name given to the curse in this article - the Blood Curse - was not used in the dialogue of the games. It was simply referred to as 'the curse', or something similar. The longer name comes from the Defiance Dark Chronicle, as one cutscene was titled 'Mural: The Blood Curse'.

The passing of the Blood Curse (the Dark Gift)

We don't have much information about how the Blood Curse was passed from the Ancient Vampires to humans. Amy Hennig (Director and storywriter of Soul Reaver, Soul Reaver 2 and Defiance) has said:

The ancient/original Vampires (like Janos) had one method, by which Vorador was raised, and by which Vorador would also raise his vampire offspring. This would be a more "traditional" method, where the vampiric curse is passed from one vampire to a human.[17]

We can probably assume 'traditional' means there was an exchange of blood between vampire and victim, as in Bram Stoker's Dracula. In Blood Omen 2, Vorador said it took "time and energy to create a vampire". It was not a trivial task for him, and it's not clear if humans died as part of their transformation.[17,18]

Kain's transformation into a vampire happened differently. He was murdered as a human, then Mortanius resurrected him from the Underworld using necromancy and - as we learned in Defiance - the Heart of Darkness. According to Amy Hennig:[17,19]

Because of this unique heritage, Kain's method of creating his vampire "sons" is also unique - rather than using the traditional "blood" gift to create a vampire, Kain must donate a portion of his spirit. By breathing a portion of his soul into a corpse, that creature's soul is drawn back into the body and the creature is resurrected as a vampire. This is how Kain raised his six lieutenants in the Tomb of Sarafan.[17]

Raziel also described this in the Background Story for Soul Reaver. He said that Kain's offspring weren't vampires due to 'a poison of the blood'. They needed blood to feed their bodies, but their souls gained 'their advantage from the powers of the underworld'. It seems the curse was not just rooted in the blood of vampires, but in their souls as well, as Kain raised his lieutenants in that way. Presumably the same method was used by the lieutenants to build their clans, and all of Kain's vampiric descendants were resurrected corpses.[20]

The effects of the Blood Curse (the Dark Gift): traits of Nosgothic vampires

Humans who received the Dark Gift/Blood Curse experienced physical changes over a period of time. A universal trait was that their hands and feet would change; initially their fingernails would become long and sharp claws, later their hands became tridactyl and taloned, like those of the Ancient Vampires. Yellow or amber-coloured eyes were also characteristic, although there were exceptions (notably Rahab). Generally, they would start to look inhuman, as Vorador did. Kain and his offspring were shown to have a variety of weaknesses: to water and fire, sunlight and sound. It's not certain which, if any, of those weaknesses were shared by the Ancient Vampires and Vorador's kind, but some vulnerabilities were likely universal. Umah described the vampiric weakness to water as if they all shared it.[21]

There was a lot of variety in Nosgoth's vampires, and the powers they had at their disposal. In Blood Omen 2, it was seen that - in addition to the traits described above - they developed 'Dark Gifts' (as they called them). These abilities ranged from mind control to incinerating people with a thought. The Dark Gifts developed differently for each vampire, and one vampire could gain the gifts of another by 'absorbing their veins'.[23,24]

Kain and Vorador were seen to shapeshift in Blood Omen, and Kain relied on his Mist Form in Defiance to dodge and pass through gates. Several vampires (Kain, Vorador, Janos and Umah) could teleport, however so could many humans, so, in this case, they were likely employing magic rather than relying on innate abilities. Using Kain as a basis of comparison for all Nosgothic vampires is not ideal, as we don't know what skills he inherited as the Balance Guardian.

The rapid evolution - and devolution - of Kain's descendants into monsters was not a result of the Blood Curse, however. That was caused by Kain's personal corruption; Kain's soul was corrupted by Nupraptor's attack on the Circle of Nine, and his vampire offspring inherited that.[25,26]