The Seer (The Witch)

The Seer (the Witch) featured in Blood Omen 2.

In Blood Omen 2 Sebastian told Kain about the Device. When Kain returned to Sanctuary after killing the traitor vampire, Vorador suggested he should visit the Seer to learn more about it. Apparently she owed Vorador a favour, and Vorador believed she was older than he was.[1,2]

The Seer lived in a small, wooden house in the canyons outside of Meridian, and she was referred to as a witch by the local humans. Kain entered her home, and she tried to dismiss him offhandedly, saying she hadn't sent for him. She knew who Kain was: better, she said, than he knew himself.[3,4]

Kain asked the Seer what she knew about the Device. She told him he was playing a dangerous game (being interested in the Device) and basically told him to forget about it, and return to his "night hunting". She said he should enjoy the short time he had left, confirming Sebastian's statement that the Device would destroy Kain. It seemed she thought Kain was powerless to stop it. When he continued to press her for an answer, she casually accused him of being Vorador's lapdog.[4,1] 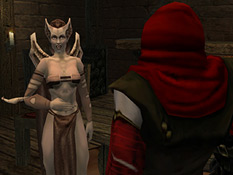 The Seer talking to Kain

Kain reacted angrily to the charge, and the Seer decided to help him after all. She told Kain that the Device had lain dormant beneath Meridian for "time beyond time", but now the Sarafan Lord was intending to use it. She said the Device had to be destroyed if Nosgoth was ever gong to be healed, and she told Kain how and where to find it. He had to manipulate a mechanism: the Seer conjoured an image of the 'sign' that would identify the building where the Device's entrance was concealed. No human could operate the mechanism, which would expose the entrance, but a vampire possibly could.[4]

Kain asked what he had to do. The Seer surprised Kain by demanding that he drink some of her blood. He didn't take up the offer immediately, instead he asked what the Seer was, as she was "like no vampire" that Kain had seen. She told him it was none of his concern who or what she was. He didn't get the chance to argue further as the Sarafan Lord had tracked Kain to the Seer's home, and started to attack it with his troops.[4]

Kain drank the Seer's blood from her wrist, and she apparently enjoyed it. Once he released her, she told him her blood would grant him the Dark Gift: 'Telekinesis', greatly increasing the basic, short-range telekinetic ability he already had. This would enable him to reveal and enter the Device.[4]

Outside, the Sarafan Lord ordered his troops to burn the Seer's house to the ground, hoping to incinerate her and Kain. As the flames took hold of the building, the Seer teleported Kain to the Device. She refused to go with him, claiming that her destiny was different from his, and questioning Kain's assumption that she was his ally. It is unknown whether she survived the fire, but it is very likely she did.[4]

The Seer appeared to have physical Hylden traits. In particular, she had prominent bone structures on her back, as they did. However, she also had long hair (all other Hylden appeared to be hairless), and if she was of that race, it looked like she must have escaped their banishment somehow. The second Defiance Q&A page

at The Lost Worlds resolved the issue somewhat. The Seer was said to be 'an extremely powerful and mysterious Hylden'. What this entails has not been revealed. We can only speculate on why she owed Vorador a favour, but perhaps, as a human, he helped her to escape the Binding?[5,2]

The Seer's comment, that she knew Kain better than he knew himself, may indicate that she had knowledge of the prophecies he was destined to fulfil as the Scion of Balance.[4]

An injured man Kain found in the Canyons seemed to think to the Lesser Demons were the Seer's minions, although this was possibly just hearsay born from human distrust of her. Prima's Official Blood Omen 2 Strategy Guide also mentions this rumour, saying she reputedly created the creatures to kill trespassers. One thing is certain: the Seer didn't fear the Lesser Demons: several were laying dead outside of her home.[3,6]

The 'Character Biographies' page of the Silicon Knights Blood Omen FAQ mentions that 'an ancient seer' prophesied the rise of the Legions of the Nemesis: the unstoppable army that featured in Blood Omen. Although there is no way to know if she was that seer, she may well have been.[7]