King Ottmar (The Lion of Willendorf) 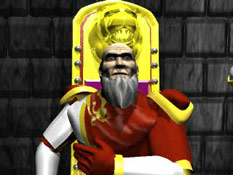 King Ottmar was a character in Blood Omen. He was the ruler of Willendorf, known as the 'Lion of Willendorf'. He was an older man; bald with a grey beard.[1]

The Oracle of Nosgoth mentioned Ottmar when Kain visited him. The Oracle said Ottmar was "the only hope to defeat the Legions of the Nemesis.", but "paralyzed by his princess' malaise", he was "useless". Later, Ariel echoed the Oracle's advice, telling Kain to rally the forces of Willendorf; they were Nosgoth's last hope against the Nemesis.[2,3]

Ottmar leading the Army of the Last Hope against the Nemesis

Kain entered Willendorf Castle and saw the king. Ottmar was on his throne, lamenting the fate of the Princess of Willendorf, who was laying in a bed in front of the royal dais. She was his only child (as far as we know; no others have ever been mentioned). To celebrate his daughter's birthday, he had announced a dollmaking contest. He promised to grant a royal favour to the winner; the person who "created the finest doll in the realm". Elzevir the Dollmaker won easily, but instead of accepting the royal favour, he just asked for a lock of the princess' hair as payment. Shortly after, the girl became utterly lifeless. Elzevir had used her hair as part of a spell, and he had stolen her soul. Ottmar was so desperate that he offered his kingdom to whoever could save his child. Kain noted that the people of Willendorf "worshipped him, even in his weakness".[4,5]

Kain chose to take up the offer. He hunted and killed Elzevir, and gained the gratitude of the king. He did not take the kingdom; instead he got Ottmar to lead his army into battle against the Legions of the Nemesis. However, the Army of the Last Hope were overwhelmed, and in this conflict - the Battle of the Last Stand - Ottmar was killed. Just before he died, Ottmar entreated Kain to destroy the Nemesis.[4,6,7,8]

Kain fulfilled Ottmar's request when - after escaping from the battle using a Time Streaming Device - he seized the opportunity to kill William the Just.

Approaching Willendorf, Kain said that "the Lion Throne had once held [his] allegiance"; presumably this meant Kain had once regarded Ottmar as his king. Considering that Kain was from Coorhagen (a city that appeared to be loyal to Willendorf), and he died wearing white armour - similar to that worn by Willendorf's soldiers, but without the lion motif - this seems likely.[9]

Kain prevented William ever becoming the Nemesis, and altered the path of Nosgoth's history. This alteration would also have impacted Ottmar's fate, as the Battle of the Last Stand could not happen without the Nemesis there to instigate it. We do not know what became of Ottmar following Kain's murder of William. However, rest assured that Ottmar, Elzevir and the princess were 'not lost in the time shuffle, they just don't have much to do with Raziel's and Kain's journeys'. That is why their individual stories have not been revisited.[10]