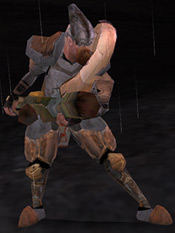 Demon Hunters appeared in Soul Reaver 2. They were humans who fought the demons and mutants that infested Nosgoth following Kain's refusal to sacrifice himself. Raziel encountered them in the second time period of Soul Reaver 2, one hundred years after the events of Blood Omen.[1]

The Soul Reaver 2 Game Manual (UK and US versions) explained the origin of the Demon Hunters. With the vampire race all but exterminated (Kain was the last surviving vampire at the end of Blood Omen) the soldiers of Moebius' citizen or mercenary army turned their attention to the greater threat posed by the demons.[2] 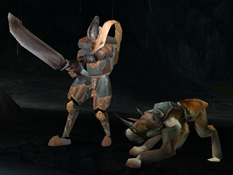 Over the next century, the army evolved and changed. They were more skilled and aggressive than their Vampire Hunter predecessors, although their methods of fighting remained similar. They were accompanied into battle by dogs (Attack Dogs) wearing armour, and they could still be split into three groups: swordsmen, pikemen and cannoneers. Raziel only saw male Demon Hunters, whereas Moebius' army had included women.[2]

Demon Hunters would attack Raziel on sight. If Raziel get too close to them while they were battling a demon, both the demon and the Demon Hunter would try to destroy Raziel as a priority. He fought them the ruins of the Sarafan Stronghold, on the path to the Pillars, in the Termogent Forest Swamp, in Uschtenheim and in the northern mountains surrounding the village.

The Soul Reaver 2 Game Manual (UK and US versions) used the words 'ancestors' and 'descendants' when describing the relationship between the Vampire Hunters and the Demon Hunters. It is likely that many Demon Hunters would literally be the great-grandchildren of Vampire Hunters.[2]