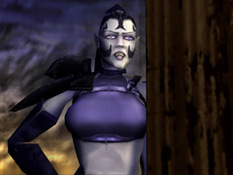 Umah appeared in Blood Omen 2. She was a vampire, lieutenant in the Cabal. When Kain awoke in Meridian from his injury-induced coma, she was there, watching over him.[1]

Umah gently eased Kain back into the practice of hunting and killing. It was her job to prepare him for the Sarafan he would encounter, not to mention the thieves and thugs of the city. Umah's aim was to help Kain achieve the power he would need to defeat the Sarafan Lord. He was the Cabal's only hope of overthrowing the Lord and the tyrannical rule of the Sarafan.[2]

Umah trained Kain within the Slums, but she was separated from him when they ran into a Glyph Guard. He next saw her in the Lower City. She gave him directions to find Sanctuary but she would not accompany him. She had other orders: to investigate the Industrial Quarter of the city. Kain was tired of following her commands, but he complied after protest.[3]

Kain reached Sanctuary and met with Vorador, the Cabal's leader. Another vampire interrupted their conversation. He had been with Umah in the Industrial Quarter, but she had been captured and taken to the Sarafan Keep, awaiting public execution. Kain was worried only about the information that would be lost by her death; Vorador was far more concerned about Umah herself. He was almost certainly her maker - she later addressed him as 'sire' - but even if this were not the case, she was still a favourite of his. She was valuable to him and the Cabal. Kain visited the Bishop of Meridian to learn how to enter the Sarafan Keep.[4,5] 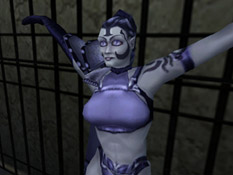 Kain infiltrated the Keep and found Umah. She was caged behind a Ward Gate. Unsure if he could deactivate it, Kain asked her to share her knowledge of the Industrial Quarter's secrets. She refused. Umah did not trust Kain to risk his life further for her once he had the information he sought. She was surprised he had come this far. Kain found a way to switch off the gate. He returned to help Umah from her prison, showing uncharacteristic concern for her injuries. As they tried to leave, they encountered the Sarafan Lord. Kain was eager to fight the Lord there and then. Umah held him back, knowing he could not possibly win. As the Sarafan Lord swung the Soul Reaver to kill them both, she used a spell to return herself and Kain to Sanctuary and safety.[6]

Umah told Kain and Vorador about the Nexus Stone: an artefact she had seen within the Industrial Quarter. Kain went to the Quarter to collect it, and learned of the Device while he was there. He was brought back unconscious to Sanctuary by a Cabal vampire, after the main factory of the Quarter collapsed. Again, Umah watched over him, waiting for him to wake.[7]

Kain travelled into the Canyons, the Device and the Eternal Prison alone. Umah told Vorador that she had wished to go with him. The elder vampire reminded her that she had been injured. She was uncomfortable that Vorador had been unable to keep in contact with Kain, and now no one knew what was happening. At that moment, Kain arrived back at Sanctuary, in the company of Janos Audron. A plan was formed to enter the Hylden City by passing through the Wharves and boarding a boat. Umah insisted on accompanying Kain this time. Kain was reluctant, but he was overruled by Janos and Vorador.[5] 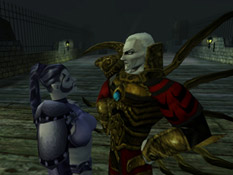 Umah questions Kain as they enter the Wharves

Kain's doubts proved to be valid. He and Umah had barely entered the Wharves when she began to question him. She wanted to know what place the Cabal vampires would have within Kain's empire. She feared he would see them as the only threat to the absolute power he craved. He would betray and kill them all. Whatever his intentions, Kain stubbornly refused to deny her accusations.[8]

Unexpectedly, Umah stole the Nexus Stone from Kain, intending to kill the Sarafan Lord herself. If she was the one to do it, she could trust herself to ensure that all vampires were freed from persecution. She could not place the same faith in Kain. He threatened her, only strengthening her resolve and mistrust of him. She teleported ahead, but Kain caught up with her a short while later.[8] 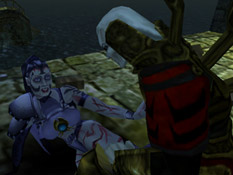 Umah pleads for Kain to save her

Umah had been forced into a fight with several Sarafan Knights, and she was mortally wounded. Kain eliminated the last Sarafan for her, and Umah collapsed to the ground, weakened by her injuries, and slowly dying. She was regretful. She had overestimated her abilities and she and Kain both knew it. He said she had been brave, but when she pleaded with him to save her with his blood, he held back. He got her to admit that Nosgoth was rightfully his, and that it would be his again. But this was not enough to save her. She had betrayed him, and Kain could never trust her again. As he killed her, he admitted just how he felt about her. She could have been his queen, but through her treachery, she had robbed him of her companionship.[9]

Kain later met with Vorador in the Hylden City. The elder vampire was willing to accept that Kain may have found Umah dead, or else been unable to save her. He was shocked that even Kain could have intentionally murdered her. Kain dismissed the importance of it. When he encountered the Sarafan Lord shortly after, he displayed his belief that Umah had been another of his servants, but the Sarafan Lord denied knowing her. Kain chose to believe the Lord was lying.[10,11]

When the Sarafan Lord was dead, Kain's thoughts returned to Umah's questions: what would Nosgoth be like under his rule? Now everyone would see...[12]

at The Lost Worlds, Umah was originally going to appear in Defiance. She would have been a human, before her transformation into a vampire. The concept art of her strongly suggests an allegiance to Vorador even then, as the symbol on her outfit appears to be his dragon sigil (Vorador's tattoo in Blood Omen and seen in the decoration of Vorador's Mansion in Defiance). The page at The Lost Worlds speculates that she may have filled a similar role to that intended for the Priestess in Soul Reaver.[13]