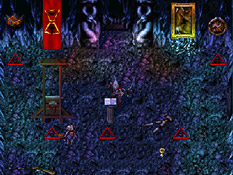 Kain examines the curious artefacts in the museum

In Blood Omen, Kain visited the Oracle of Nosgoth for advice on how to defeat Malek. At the time, Kain did not realize that the Oracle was actually Moebius.

Deep inside the Oracle's Cave, in the cavern outside of the Oracle's cauldron room, there was a curious museum. It contained many strange artefacts. There were two shields (one battle-worn and bearing the lion sigil of Willendorf), a guillotine (still wet with blood), a new suit of Sarafan armour (resembling Malek's), and a book. The book spoke of the genesis of the Sarafan Order. It had an account glorifying their crusade, and mentioned Malek's success in leading them to many victories.[1,2,3,4,5]

There were other objects too, that Kain did not remark upon. A rag doll was laid near the guillotine, and a red flag hung at the back of the room. Later, Kain would be able to see the significance of these artefacts as well as the others.

Moebius had collected his items from two different paths of history. Each would be relevant in some way to Kain's journey. The armour and the book were connected to Malek, who Kain still had to defeat somehow. The doll was Elzevir's, the creation that Kain would later steal from the dollmaker along with his life. The battle-worn shield related to the Battle of the Last Stand, the conflict that would bring the army of Willendorf against the Legions of the Nemesis.

The newer-looking shield, the guillotine and the red flag came from the alternate path of history. Moebius had arranged things so Kain would travel back in time to assassinate the boy king, William the Just. Back in the present, that act was going to cause a genocidal war against the vampires under the Time Streamer's direction. The shield was from the court of William the Just, the red flag was the banner of Moebius' citizen army, and the guillotine was the one used to publicly behead the captured vampires. Kain would later see Vorador executed by it.

Some players of Blood Omen have noticed that there was one last object: one that had no business being in a Legacy of Kain game at all. In the bottom, left-hand corner of the museum there was an item that appeared to be a shotgun. Firearms - of any description - are almost unheard of in the series; the closest thing that springs to mind are the cannons used by the Soul Reaver 2 vampire hunters. Chris@Crystal (the Eidos Forums moderator, and Legacy of Kain series tester) was once asked about it, but he could only go along with the theory that forum members had suggested: that Moebius probably picked up the 'shotgun' from another time period - one we haven't seen yet. He didn't know for sure what it was, or why it was there.[6] 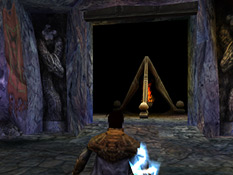 When Raziel visited the Oracle's Cave in Soul Reaver, nearly all of the artefacts had disappeared. Only the red flag remained: a tattered rag after so many centuries.

Moebius' museum presents a minor inconsistency in the Legacy of Kain series. According to the rules of time laid down in Soul Reaver 2, Moebius shouldn't have been able to collect artefacts from different timelines. That would only be possible if alternative timelines existed in parallel to each other. In Soul Reaver 2, Kain stated that history was rewritten. Once a paradox was introduced at a point in time, everything that followed that point was overwritten with Nosgoth's 'new' history. Time flowed in a single stream. It could be diverted slightly, but it never forked or split. Moebius, as the Time Streamer, may have been able to bend the rules, so his museum could exist regardless.[7]