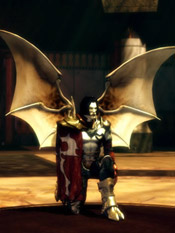 Raziel unfurling his newly-grown wings in front of Kain 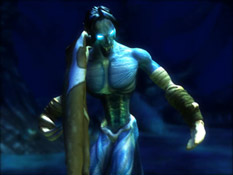 Raziel first appeared in Soul Reaver, during the time of Kain's empire. He was the 'first-born' of Kain's lieutenants and his second-in-command. Raziel had served his master faithfully for a thousand years.

Unfortunately, Raziel was not to retain his privileged position. Like all vampires of this era, he experienced stages of accelerated evolution, and his most stunning metamorphosis proved to be his downfall: he grew a pair of magnificent bat-like wings. Raziel displayed his new wings in front of the Council of Nosgoth; his Lord Kain, and his fellow lieutenants - Turel, Dumah, Rahab, Zephon and Melchiah. His brethren were surprised by the extent of his latest change, but nothing could have prepared them for Kain's shocking response. He had surpassed Kain's own evolution, and in an act of seemingly irrational cruelty, Kain ripped the wings from Raziel, wrenching the bone away violently. He then ordered that Raziel was to be executed. Turel and Dumah carried their disgraced elder sibling to the Abyss, and threw him in on Kain's command.

The water of the Abyss burned Raziel's vampiric flesh excruciatingly. His jawbone was lost; dissolved. He should have been destroyed completely, but by some miracle, the pain receded, and he found himself in the presence of the Elder God. He had been left a frail-looking husk. His features were still vaguely vampiric, but he was no longer the proud warrior he had been. In this cavern in the Spectral Realm, under the swirling Abyss, the Elder claimed to be responsible for Raziel's continued existence. It encouraged Raziel's need to avenge the injustice he had suffered. 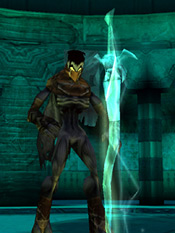 Raziel, about to claim the wraith-blade

Adjusting to the ruined body he detested, Raziel noticed changes in himself, beyond his physical appearance. He was stronger, but most important of all, his blood-thirst had been superseded by a hunger for souls. He was no longer a vampire; now he was some kind of wraith, and the remnants of his tattered wings hung limply from his back. His natural place was now the Underworld - the Spectral Realm - and it required effort to return to the Material Realm inhabited by the vampires. He had to gather matter at planar portals, and will himself to manifest with a solid, physical body.

Negotiating a course through both realms, Raziel sought his brethren. He killed Melchiah, then confronted Kain in the Sanctuary of the Clans; the very place he had fallen from grace. Kain and Raziel battled, but the fight drew to an abrupt end when Kain brought the Soul Reaver sword down on Raziel. The blade shattered inexplicably, and the captive spirit that possessed the Reaver was released. Raziel bonded with this soul, and it manifested itself as a wraith-blade, as dangerous a weapon as it ever was, but free of its corporeal prison.

Following the encounter with Kain, Raziel hunted and destroyed each of the other lieutenants, with Ariel and The Elder God present to offer him guidance. During the course of his travels he uncovered a great secret about his past that made him re-evaluate everything he knew about himself. As a human, Raziel had been a Sarafan warrior-priest, a vampire-hunting soldier whose ideals were completely opposed to everything he believed as Kain's favoured son.

Only Turel was unaccounted for by the time Raziel caught Kain again, this time in the Chronoplast. Crucially in that meeting, Kain commented that "free will is an illusion"; in Nosgoth, each creature's future was predestined, and they simply played out the parts fate had written for them. Kain did not plan to satisfy Raziel's desire for vengeance yet; he had achieved his goal by leading him to this place. Kain activated the Chronoplast device and stepped through a portal, forcing his first-born to follow. Raziel was greeted by Moebius the Time Streamer on the other side. 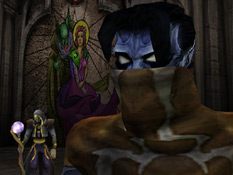 In Soul Reaver 2, Raziel learned that he had been delivered into Nosgoth's history. The time period he now inhabited was thirty years prior to Kain's refusal at the Pillars. Moebius offered to help Raziel find and destroy Kain, their common foe. The wraith was aware of Moebius' reputation for deceit, and he was wisely reluctant to trust him. Raziel was in the headquarters of Moebius' mercenary army - formerly the Sarafan Stronghold. As he explored, Raziel uncovered "evidence of [his] former nobility, and [his] life as a Sarafan priest." He also found a previous incarnation of the physical Soul Reaver, laid out and broken upon the tomb of William the Just. When he moved close to it, a temporal distortion was caused. Time and space fluctuated when the physical Soul Reaver and the wraith-blade were near to each other. Raziel's soul energy was leeched to repair the broken sword.

Moebius witnessed this, and saved himself from Raziel's confused wrath by revealing that he too was a servant of the Elder God. Afterwards - away from Raziel - the Time Streamer admitted that for once, his life had actually been put at risk, and he could have been killed there, before his predestined time. Raziel, despite what Kain had said in the Chronoplast, could have done it. The full extent of Raziel's abnormal free will was explained gradually during Soul Reaver 2 and Defiance, and it became his most important characteristic.

Raziel left the Stronghold and confronted Kain at the Pillars. During the course of this meeting, he witnessed the Pillars' corruption, and listened impatiently to what Kain had to say. Kain disappeared and Raziel continued his journey, learning more and more about the forgotten history of the land. He began to reject the Elder God's authority as he uncovered ancient shrines depicting a winged vampire race, and Vorador piqued Raziel's interest by mentioning Janos Audron, hinting that Janos had something to do Raziel's greater destiny. 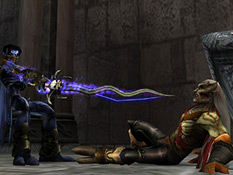 Raziel struggling to control the twinned Reaver and wraith-blade

Exhausting his interest in the era, Raziel returned to the Stronghold, hoping to use Moebius' Time Streaming device. He encountered Kain again in the main chapel, near the Soul Reaver. Kain was expecting to die there; it was fated to happen. He actually handed Raziel the sword, but he also urged his first-born to reject the force - the pull of history - that was drawing Raziel to kill him. Raziel, he said, had "the power to reshape [their] inevitable futures". This statement (in conflict with Kain's previous assertions about immutable destinies) supported Moebius' belief that Raziel was somehow exempt from the rules.

Now Raziel was armed with the twinned wraith-blade and physical Soul Reaver, the temporal distortion they caused reached a peak. The paradoxical meeting of the two Soul Reavers was enough to "derail history", just as it had when Kain fought William in Blood Omen. Raziel spared Kain, causing history to be altered. At this point, it was unclear how much power Raziel had personally to alter destiny, as he seemed to need the Soul Reaver(s) to initiate the change. As mentioned, Kain himself had used the Soul Reaver paradox in Blood Omen - although unwittingly - so this alone did not make Raziel special. Kain claimed that his first-born had an important destiny still to uncover, if he had "the heart for the truth, and the will to see it."

Raziel opened the Stronghold's unused Time Streaming chamber and saw Moebius arrive there, apparently unsettled. He used the wraith-blade to threaten the Time Guardian into operating the device for him. Raziel hoped that he might gain answers from the legendary vampire, Janos Audron, but Moebius sent him into the future instead of the past - one hundred years after Kain refused to sacrifice himself. Raziel emerged from the chamber to find the Sarafan Stronghold in ruins, and populated with demons and demon hunters. Shortly before leaving the Stronghold, he ran into Moebius' martyred spirit. Raziel expressed his doubts that this Moebius truly was a ghost, and offered to devour him to be sure. Predictably, Moebius promptly vanished. Crystal Dynamics

have since confirmed Raziel's suspicions were correct - this 'ghost' was an illusion constructed to influence him.[1]

Raziel needed to find his own way back into Nosgoth's history. He travelled northwards and found Ariel at the Pillars. She was reflecting on the differences between herself and Kain, and angry at Kain for her continued captivity. Raziel was beginning to doubt that killing Kain was really in his best interests, and the interests of Nosgoth. He argued this point for a while with Ariel, rather spitefully suggesting that her imprisonment at the Pillars could be eternal. She fled into the Spectral Realm to escape him, and eventually he tired of tormenting her. He left, and passed through the swamp, Uschtenheim and the Canyons. Deep in the Canyons, Raziel found the collapsed remains of Janos' Retreat. Kain appeared for another brief conversation, and warned Raziel of the forces mobilizing against them.