The Mass appeared in Blood Omen 2. It was the ancient and deadly creature that lived inside the Device. The Mass looked more like a plant than an animal; like a giant jellyfish. The Device could not function without it, and the Beast (Janos Audron) was imprisoned in the Device to feed it.

The Mass in Blood Omen 2 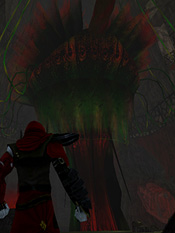 The Mass was the living heart of the Device

In Blood Omen 2 Kain entered the Device, intending to destroy it on the advice of the Seer. Inside, he met the Beast, who informed Kain that the city-sized, underground Device was too big for him to destroy alone. The Beast directed Kain to find the Builder - the architect of the Device - who was imprisoned in the Eternal Prison.[1,2]

Kain found the Builder, and learned about the Device's capabilities and history. During their war with the Ancient Vampires, the Hylden built the Device. The Builder told Kain it housed an ancient and "eternal" creature called the Mass. This creature was "capable of killing any living thing with but a thought", yet "harmless without a channel for its mind".[3]

The Device was designed to attune and channel the lethal mental energy of the Mass, so it would kill all living beings in Nosgoth, except the Hylden race. The Device was left incomplete when the Hylden were banished to the Demon Realm, so the Device and the Mass had lain dormant beneath Meridian until the Sarafan Lord re-entered Nosgoth (through the chain of events shown in Defiance).[3,4]

Kain realized that the Glyph Energy [BO2] pipes, installed all around Meridian, were the conduit the Sarafan Lord had built to conduct the Mass' mental energy. The Builder did not want to see the Device used any longer, despite it being his creation. He told Kain to kill the Mass, "that which [he] created out of arrogance and pride". The Builder offered his blood to Kain, saying that the Mass could not withstand "pure blood from the elder races". Kain drank, and returned to the Device with the Builder's blood in his veins.[3] 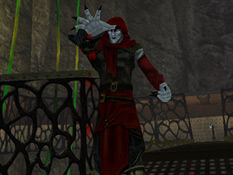 Kain poisons the Mass with blood from his wrist

The Beast sensed the change in Kain upon his return. It had already told Kain how it was enlaved to feed the Device with its "life". It knew of the Mass from the human slaves in the Device; this was the living part of the machine that was leeching the life of the Beast.[5,2]

Kain found the Mass deep in the heart of the Device. Kain slit his own wrist, and allowed a relatively small amount of blood to fall into a tube-like appendage of the Mass (probably its feeding tube). The effect was instant: the poisoned Mass immediately began to rupture and haemorrhage. As it died, the Device was rendered useless. Kain returned to the Beast's chamber, and found it much changed.

The Beast was gone. Instead, in its place crouched a winged humanoid. Janos Audron stood and identified himself to Kain, confirming that he was in fact the same creature who had assisted him. The parasitic demands of the Device and the Mass on Janos' blood had starved him, causing his horrendous devolution. As the Mass died, Janos' body was allowed to restore itself to its natural form.[5]

The Mass may have been the only example of its kind; the Builder's claim that he created the Mass "out of arrogance and pride", suggests that it was a lifeform he had engineered, and depending on the extent of his modifications, it could have been entirely unique.

In Defiance the Hylden Lord, possessing Janos, told Raziel they "required the blood of [their] ancient enemy". He was referring to their need to feed the Mass. Any Ancient Vampire's blood would probably have been suitable, but Janos was the last of them alive.[6]

It's a little strange that an Ancient Vampire's blood would nourish the Mass. The Builder stated that the Mass could not withstand "pure blood from the elder races", and given this comment, it's odd that Janos' blood wasn't toxic to the creature. Perhaps "elder races" only referred to Hylden bloodlines, or, as Janos was afflicted with the Blood Curse, his blood could be considered impure.[3]