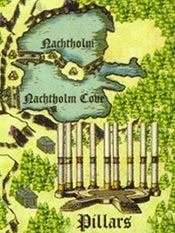 Nachtholm was a settlement that appeared in Blood Omen. It was located to the north-west of the Pillars, between Ziegsturhl and Steinchencröe. According to Kain, Nachtholm was "typical of Nosgoth peasantry", and was populated with farmers, smithies (blacksmiths), brigands and cutpurses.[1]

The town was built on patches of land within Nachtholm Cove, surrounded by water. Bridges linked different parts of the settlement together. Nachtholm's business specialty appeared to be tavern-keeping; there were more named taverns there than anywhere else. The Lion Head pub, Ye Towne Tavern, and King's Tavern could be found there, along with the Nachtholm Armoury.

Brigands - possibly the outlaws Mortanius employed to assassinate Kain - had an underground camp and headquarters hidden to the east of Nachtholm Cove. Kain could only enter it during a full moon.[2]