The Priestess (The High Priestess of the Vampire Worshippers) 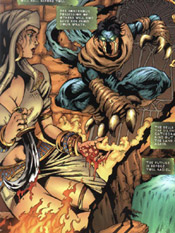 The Priestess as depicted in the comic by Top Cow

The Priestess never actually appeared in a Legacy of Kain game. She was intended to feature in Soul Reaver, but because of the drastic changes that were made to the storyline prior to release, her character was removed. Evidence of her existence remains in the unused audio files on the game disks, and also in the promotional comic produced by Top Cow

She was the 'High Priestess of the Vampire Worshippers' (the comic called her that). Kain was her god, and she worshipped him and his vampire offspring as deities. She was based in an Undercity and Temple area beneath the Human Citadel, and she presumably co-ordinated the Worshippers' kidnapping raids inside the Citadel, where they sought to obtain human blood sacrifices for their vampire masters.[1,2,3,4]

The Priestess believed Raziel was a heretic for betraying Kain and his brethren. At some point during Soul Reaver, Raziel would have fought and killed her. By devouring her soul, he would have gained the ability to possess his enemies. The Elder God described the skill in this piece of unused dialogue:[2]

"In her long service to her vampire masters, the Priestess had learned a measure of sorcery. In devouring her soul, this power is conferred on you. You may project your spirit, and in so doing, take possession of your victim's body."[2]

It used to be possible to purchase the comic online, and it occasionally appears for sale on eBay. It is short, but nicely presented, and gives an interesting perspective on Raziel's character prior to his execution.[1]

at The Lost Worlds, Umah was originally going to appear in Defiance. She would have been a human, before her transformation into a vampire. The page at The Lost Worlds speculates that she may have filled a similar role to that intended for the Priestess in Soul Reaver. The concept art of her there strongly suggests that Vorador would have had her allegiance.[5]