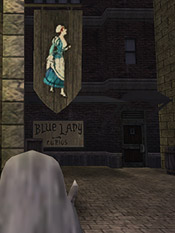 The exterior of the Blue Lady Curios shop

The Blue Lady Curios shop was an important location in Blood Omen 2, and it could be found in the Lower City region of Meridian. It was described as being "in the eastern part of the district".[1]

The shop's name suggests that it sold bric-a-brac; miscellaneous objects of curiosity - or at least purported to - to distract the attentions of the Sarafan. Despite its unremarkable appearance, it held a great secret. Beneath the Blue Lady shop was Sanctuary, the headquarters of the Cabal. In this era, where vampires were again being hunted to extinction, such disguises were necessary. Sarafan Guards patrolled the surrounding streets.[1]

Kain found the Blue Lady shop with the help of the Tapster of the Red Raven Pub and a human Cabal sympathizer. The shop had distinctive signage illustrating its namesake: a red-haired woman wearing a white hat and a blue and white dress. The shop's name was written upon its window glass. Kain's path to the shopfront was initially blocked by Ward Gates, suggesting that the vampires of the Cabal may have had another, secret means of entry or otherwise teleported in.[2,1]