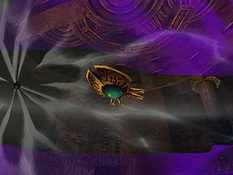 The Nexus Stone in the Industrial Quarter

The Nexus Stone appeared in Blood Omen 2. It was a cyan-coloured gemstone, mounted in gold (or a gold-coloured metal). The complete artefact was roughly hand-sized.

Umah saw the Nexus Stone while she was in the Industrial Quarter, just before she was captured by the Sarafan. Kain rescued her from the Sarafan Keep, and she told both him and Vorador about the stone when they were safely back in Sanctuary.[1]

Umah said that she had found a huge chamber inside the main factory. The chamber housed a magic portal, held open by the power of a single artefact: the Nexus Stone.[1]

Vorador told Kain that the stone could "bend time and space to create doorways to any location within Nosgoth", but more importantly, it was able to protect its wearer from the Soul Reaver. When Kain questioned this, Vorador offered him proof: the Sarafan Lord had worn it the day he defeated Kain. Kain realized the value of the Nexus Stone. He knew that with it, he would stand a better chance when he met the Sarafan Lord in battle again. The Sarafan Lord possessed the Soul Reaver, and would no doubt use it against him. Kain ventured into the Industrial Quarter to steal the stone.[2,3,4]

Kain found the Nexus Stone, but Sebastian - one of the vampires allied with the Sarafan Lord - was waiting for him. Kain had to defeat Sebastian before he could take it. At one point, the other vampire tried to destroy the stone, but Kain prevented him. Eventually defeated, Sebastian told Kain that the Nexus Stone's portal led "to an ancient device, deep underground" that would destroy Kain and let a new reign begin in Nosgoth (the Device).[5,6]

When Sebastian was dead, Kain collected his prize. Removing the stone, however, caused the machinery around it to become unstable. This disruption spread throughout the main factory, causing explosions and its collapse. Kain was thrown from the factory roof and knocked unconscious, but luckily he was carried back to Sanctuary by a vampire belonging to the Cabal.[7] 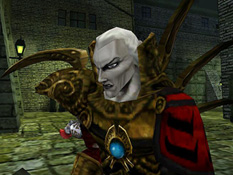 Kain wearing the Nexus Stone after reclaiming it from Umah

Kain wore the Nexus Stone as he continued on to the Canyons, the Device and the Eternal Prison. Umah joined him to pass through the Wharves, but she stole the stone from him. She intended to face the Sarafan Lord herself. Kain was shocked and angered by her betrayal. He threatened her, and Umah left. When he caught up with her again, she was mortally wounded. Rather than save her with his blood, he reclaimed the Nexus Stone and killed her for her treachery.[8]

Kain had the Nexus Stone when he finally faced the Sarafan Lord on the metal structure above the Hylden Gate. He had learned from Janos Audron that the stone was required to close the gate once and for all. Kain managed to knock the Sarafan Lord off the platform, but the Lord quickly re-materialized behind him. He told Kain that while Kain kept the stone to preserve his life, the gate would remain open. It was a stalemate, but time was on the Sarafan Lord's side. He would eventually win if Kain did nothing.[9,10]

Kain responded by throwing the Nexus Stone into the Hylden Gate, regardless of the danger he was putting himself in. Closing the gate would kill the Hylden already in Nosgoth, and prevent more arriving. The gate sealed and collapsed, but not before the Sarafan Lord had thrown Janos Audron through it. Janos was trapped within the Demon Realm; the hated place of banishment that the Ancient Vampires had sent the Hylden to after their wars.[10,11,12]

There has been some speculation on fan forums about the Nexus Stone's origin. It has been suggested that the orb of Moebius' Staff might have been made of the same material as the Nexus Stone, or otherwise enchanted with similar magic. They both had the power to weaken or disable the Soul Reaver. However, as Kain and Umah were both able to wear the Nexus Stone without difficulty, it clearly didn't incapacitate vampires like Moebius' staff could.