Vampire Worshippers were humans who, for whatever reason, worshipped Nosgoth's vampires. They were seen in Soul Reaver and Defiance. 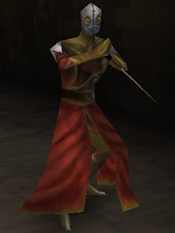 Kain raised his lieutenants, and as his vampire empire grew stronger, the humans of Nosgoth were overpowered. It was inevitable that the vampires would eventually control the land, and - regarding humans as vastly inferior - would enslave them for labour and food.[1] 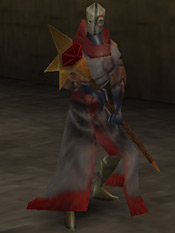 The humans reacted to their hopeless situation in different ways. Some became Vampire Hunters, and tried to continue the battle against Nosgoth's new rulers. In contrast, others decided that their best chance for survival lay in willingly serving the vampires instead of fighting them. These humans began to worship the vampires as if they were gods. They would lay down their own blood and lives to sate their masters' appetites, or kidnap other humans to be sacrificed.[1,2]

In Soul Reaver, Raziel encountered Vampire Worshippers in the Silenced Cathedral (Zephon's territory). For some unknown reason, the Zephonim seemed to be the only clan making use of them. There were two classes of worshipper: Adepts and Novitiates. Adepts wielded their sacrificial knives as weapons, and Novitiates were armed with staves. As Raziel was a threat to their vampire masters, they would attack him.[2] 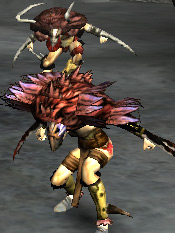 Feral Humans were introduced in Defiance. They were a third type of vampire worshipper, entirely unconnected to those mentioned above. Kain encountered them five hundred years before the events of Blood Omen.

According to Prima's Official Defiance Strategy Guide, they were a uncivilized tribe of humans who revered the Ancient Vampires, and attempted to mimic them in a primitive way. The Ferals wore headdresses made of feathers, and their fighting style included swift, agile leaps at their enemies. They inhabited the Vampire Citadel, which they regarded as a sacred and holy place, and they could be found in both the open-air terrace area and the Reaver forges. Often the Ferals would hide under their feathers, remaining still, so they could ambush Kain when he approached. They were armed with long claws, and they would also throw bone-blade projectiles from a distance.[3]

The Ferals were a fairly even mix of males and females. They had some language - the word 'vampire' was easy to make out - and they had managed to survive despite the apparent lack of food. They were possibly descended from humans who had once served the Ancient Vampires in the Citadel, although their exact origins were unknown, and by the Blood Omen era, the tribe appeared to be completely gone. Certainly, attacking Kain must have cut their numbers dramatically, but their absence was generally left unexplained.

Although she did not appear in Soul Reaver, Raziel was originally supposed to encounter the High Priestess of the Vampire Worshippers. There was going to be an Undercity and Temple area beneath the Human Citadel. That area and the Priestess were cut from the game before release, but had they been included, Raziel would have found her - and presumably lots of worshippers - there.[4,5]