The Necropolis - as it's called in Prima's Official Soul Reaver Strategy Guide - was a location in Soul Reaver. It was the territory of the lieutenant Melchiah, and his clan: the Melchahim.[1] 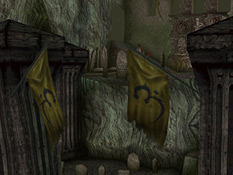 The first part of the Necropolis: a graveyard beyond two gold-coloured Melchahim flags

The Necropolis was adjacent to Raziel's former territory, placing it the north-west of Nosgoth. A decorative gate incorporating the Melchahim clan symbol separated the two territories. Passing through the gate, the first part of the Necropolis Raziel entered was an obvious graveyard, with tombstones organised in rows beyond two gold-coloured Melchahim flags. In this area there was an image of Melchiah - as he appeared at the time of Raziel's execution - carved into a wall. 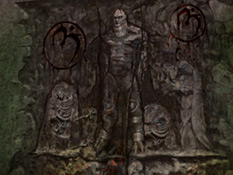 The carved image of Melchiah in the Necropolis

In the centuries since his execution, the Melchahim had come to resemble zombies more than vampires. Raziel didn't recognise them at first. When he identified them as Melchiah's descendants, he wondered if the Melchahim were "so debased as to recruit fledglings" from the "desiccated corpses" interred in the Necropolis.[2,3,4] 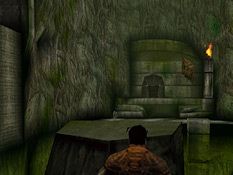 Part of the Necropolis' lake

Passing through an indoor area and through a Warp Gate chamber, Raziel found a small lake. The lake was larger than it appeared at first glance, as it extended into other places via underwater tunnels. It was worth Raziel returning to it after killing both Melchiah and Zephon: he could find the Force Glyph Altar and one of the Health Power-Ups behind two ornate underwater grates. A second Health Power-Up could be found at the top of a climbable wall beside the lake, and he could emerge from the lake into an area containing the ruins of Nupraptor's Retreat. The close proximity of the retreat suggested that the Necropolis lake was once part of the channel that flowed from the retreat's waterfall to the Lake of Tears. 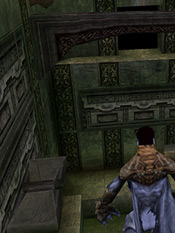 The jumping puzzle including pulley-controlled ledges

Beyond the lake there was another indoor area. The first room contained two fledgling Melchahim and three stone sarcophagi. The second room started with a steeply descending corridor which took Raziel into a large underground chamber. It was there he encountered Soul Reaver's first Vampire Wraith.

Once the Wraith was dispatched, Raziel could concentrate on the puzzle of exiting the chamber. He had to push blocks into wall sockets to open gates, and fight adult Melchahim in a pit to get one of those blocks into position. His goal was to reach the doorway on the upper level of the chamber, and he managed it in the Spectral Realm by jumping onto beams and a pulley-controlled ledge he had previously raised. Solving another small block puzzle and ascending a ramp brought Raziel back to the lake, and enabled him to access another part of it. 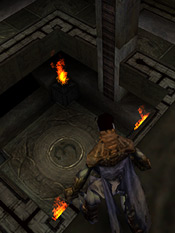 Melchiah resided at the bottom of the third and final indoor area of the Necropolis. There was a large chamber with a central platform that had to be lowered three times to reach his lair. Firstly, Raziel had to ride an elevator down to an engine room of sorts. There he activated a huge geared mechanism, which - when he returned to the upper level - allowed him to pull a lever that dropped the central platform a short distance. This exposed the entrance to a tunnel which Raziel could follow to get underneath the central platform. The slope leading to Melchiah's chamber was accessible at this point, but temporarily blocked by a gate.

The central platform was supported by four wooden buttresses. Raziel destroyed them with four large fire urns which he pulled beneath the buttresses, following guiding tracks in the ground. As fire consumed the last one, the central platform crashed down several more yards or meters.

The final descent of the central platform was triggered by Raziel dragging the fire urns further along their guiding tracks until they locked to position at the four corners of the platform. Once this was done, the gate blocking access to Melchiah's lair was open. Raziel entered and fought his horribly deformed sibling. In the centre of the underground chamber there was a circular cage, with a vicious serrated wheel positioned above it. It was a giant meat grinder, presumably used to kill individuals (likely humans) en masse. Blood stained the floor in and around the cage. Raziel lured Melchiah under the grinder and killed him with it.

The name 'Necropolis' is a descriptive term used to refer to a large cemetery. The name derives from the Greek language and means 'city of the dead'. As such, its use in Prima's Official Soul Reaver Strategy Guide doesn't necessarily mean the Melchahim would have called their territory that.

If Raziel returned to the Necropolis after gaining the Soul Reaver, he could collect one of the Eldritch Energy Power-Ups from there. It was concealed in a chamber beneath a sarcopaghus - the one marked with a motif of crossed Soul Reavers - in the room beyond the lake where Raziel encountered the two fledgling Melchahim.