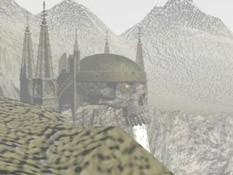 Nupraptor's Retreat - the fortress of Nupraptor the Mentalist - was first visited by Kain in Blood Omen. It was located on a cliff top above and to the west of Vasserbünde, and it resembled a skull; an indication of Nupraptor's role as Guardian of the Pillar of the Mind.[1]

A waterfall flowed from the skull's mouth, and the eye sockets of the retreat were particularly notable. Looking out, one displayed Nosgoth as it was - still a green and fairly pleasant land at that point - and the other let Kain see the landscape warped and discoloured, making Nosgoth's underlying corruption obvious.[2]

Pilgrims travelled from all over Nosgoth to seek an audience with Nupraptor, drawn by the allure of his telepathic and telekinetic powers. However, the local people and guards of Vasserbünde were far more wary of the Mentalist. They heard disturbing noises from the retreat: Nupraptor "cackling to himself", and Kain heard screams as he approached. The pilgrims went in, but they didn't come out again. A servant of Nupraptor's had once escaped from the retreat, turning up in Vasserbünde mad and scared out of his wits. Nupraptor's home was a place best avoided.[3,4,5,6,7]

Kain saw firsthand what hospitality Nupraptor offered his visitors. Soon after entering the retreat, Kain was ordered to leave by the Mentalist. Nupraptor wanted to be left alone to continue his mourning for Ariel, even thirty years after her murder. It is unknown whether or not she ever lived with him there. Kain pressed on, and saw what had become of others who intruded on Nupraptor's self-imposed solitude. Quite a few bodies littered the retreat's corridors. The Mentalist's wrath also extended to those in his employ; in one room, Kain found a serving girl "catatonic with fear, choking out half-words through bloodied, broken teeth."[8,9,10,11]

Deep inside the retreat, Kain found Nupraptor being guarded by Malek. This was Kain's first encounter with the Paladin, but Nupraptor dismissed him, and confronted Kain alone. Kain killed Nupraptor, and the retreat probably stood empty following his death, especially considering the place's reputation.[12] 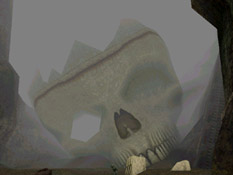 Raziel found the ruins of Nupraptor's Retreat many centuries later in Soul Reaver. What remained was overrun by the Melchahim, and could be considered part of their territory (the Necropolis). 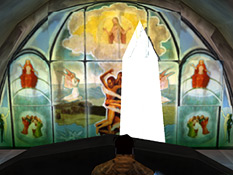 Most of the skull had fallen from the cliff top, and the waterfall appeared to have long since dried up. Raziel could work his way up the cliff, passing through the remains of the retreat's interior. By traversing a tricky series of wooden beams, he could emerge on the lower-jaw plate of the skull, which was still in its original position. The wind was very loud up there, near the plate's edge.

From the plate, Raziel could reach the concealed entrance to the Stone Glyph Altar, but it was worth him having a quick look around before making that leap. If he explored the plate, gazing upwards, he could find a rather grand stained glass mural. It appeared to depict a religious scene, with angels, a godlike figure and people praying. Men and women in the centre were encircled with band of white vapour, and seemed to be descending into a lake. At the present time, there is no clear meaning or interpretation for this mural, unlike most of others in the series.