The Heart of Darkness in Blood Omen

The Heart of Darkness originally featured in Blood Omen as a gameplay device. It appeared as one of the Battle Artefacts, and functioned as an 'extra life' collectable, so there were lots of them to be found. The first was in Kain's mausoleum. In the later games, the Heart of Darkness was given greater significance. It was established that there was only one. The hearts Kain collected and used in Blood Omen were symbolic representations of the relic, not the real thing.[1]

In Blood Omen, Kain commented on the legends that surrounded the Heart of Darkness. It supposedly had the power to restore vampiric unlife, and it was "reputed to have been ripped from the chest of the greatest vampire to have ever existed": Janos Audron.[2]

The Heart of Darkness in Soul Reaver 2 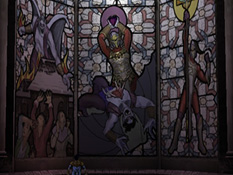 In Soul Reaver 2, Raziel saw a stained glass mural demonizing Janos, depicting his execution by the Sarafan. The Heart of Darkness was pictured being held aloft, in triumph, by a Sarafan warrior standing over Janos' body.[3] 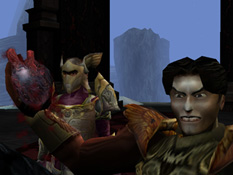 Raziel met Janos and, to his horror, he was present to watch the execution, powerless to stop his former, Sarafan self from committing the deed. The Sarafan Raziel hacked open Janos' chest, and pulled out his heart. The Sarafan Turel - who had been using Moebius' Staff to incapacitate Janos - exclaimed that the heart continued to beat in the Sarafan Raziel's hand. The party of Sarafan fled from Janos' Retreat as it started to collapse around them, taking the Heart of Darkness with them. Raziel pursued the Sarafan, intent on returning the stolen Heart of Darkness to Janos, and reviving him with its power.[4]

Raziel failed to reclaim the heart before the Reaver turned on him at the end of Soul Reaver 2. However, in Blood Omen 2, around nine hundred years later, the younger Kain found Janos alive within the Device, a prisoner of the Hylden. It was unclear when the event had occurred, but clearly someone - perhaps Raziel - had returned Janos' heart and restored him. No details were revealed in that game, but the following instalment, Defiance, filled in most of the gaps.

The Heart of Darkness in Defiance

In Defiance - in the Blood Omen era - Raziel was desperate to avert his terrible destiny: to become imprisoned inside the Reaver. He sought Vorador, the maker of the Reaver, and was surprised to see that Vorador had the body of Janos Audron within his estate. The corpse was still intact and free of decay five hundred years after his murder. Somewhere, the Heart of Darkness was still beating, but it had been hidden too well, and Vorador had been unable to find it himself. Raziel travelled to Avernus Cathedral, where the heart had been taken centuries earlier to keep it from falling into vampire hands. He hoped that by raising Janos, he could discover how to escape his fate.[5] 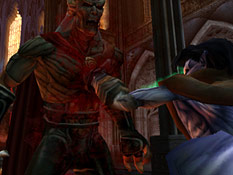 Raziel finds the Heart of Darkness

In the Avernus Catacombs, Raziel encountered Mortanius. Raziel learned that the Necromancer had recently used the Heart of Darkness to resurrect the nobleman Kain as a vampire. Janos' heart was inside Kain and always had been, ever since he joined the ranks of the undead. To restore Janos, the heart would first have to be pulled out of Kain. Kain would have to die.[6]

Raziel resurrects Janos with the Heart of Darkness

The inevitable confrontation between Kain and Raziel occurred later at Avernus Cathedral. Kain was adamant that the heart should remain undiscovered, despite having no idea where it was. Raziel was victorious in their fight. He thrust his claws into Kain's chest and wrenched Kain's heart out. Raziel declared that he had "found the Heart of Darkness". Kain was thrown through a portal by Raziel's telekinesis, but Raziel was sure that wherever his body was, Kain was certainly dead. Raziel returned to Vorador's Mansion and resurrected Janos with the heart: his "blood offering" for the answers he needed. Thus Janos was alive again, and his appearance in Blood Omen 2 was made possible.[7,8,9] 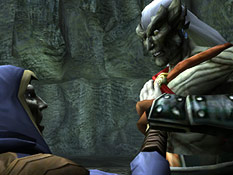 Kain holding Moebius' hand to his chest; the Heart is no longer there

Against the expectations of Raziel and Moebius, Kain continued to live even without the Heart of Darkness. Officially, his nature as the Scion of Balance allowed him to survive. He awoke in the Demon Realm, seemingly a bit disturbed by "disquieting stillness" he felt where his heart - actually Janos' heart - had once been.[1,10]

When he confronted Moebius at the Vampire Citadel, at the end of Defiance, the Time Streamer's staff no longer incapacitated him. Janos' heart was the only thing that had made him vulnerable to the staff's magic. Kain knocked the staff from Moebius' grasp and grabbed Moebius' hand, pressing it to his chest, emphasising that the Heart of Darkness was no longer in its place. Kain wryly noted that he "always was considered heartless".[11]

In Blood Omen 2, the younger Kain had said Janos (as the Beast) was "a being whose existence was entwined with mine, far more than I could ever imagine." Now we know what happened to the Heart of Darkness, it seems Kain was right.[12]

It is uncertain if the Heart of Darkness actually had the power to restore vampiric unlife, as we've never seen it used for that. In Janos' case, having it returned to him was no different from pulling a spear out of a vampire in Soul Reaver. His resurrection needed no additional magic to make sense. We do know that the heart had the power to create vampires, as it did with Kain, and this is some proof that it embodied the essence of the Dark Gift as their enemies (the Circle, the Sarafan) apparently thought. Whether Janos' heart was unique in this - or if any heart of the Ancient Vampires would have done the job - remains unknown, although there is no real reason why Janos' should be special. His 'Reaver Guardian' status appeared to be honorary, not physical (i.e. he wasn't born into his role as the Guardians of the Pillars were).[5]

Kain was approximately 2030 years old when he fought with Raziel at Avernus Cathedral. He was around 30 in Blood Omen and 430 in Blood Omen 2. Sarafan Raziel was killed around 500 years before the events of Blood Omen, then entombed for around 1000 years before he was resurrected as a vampire by Kain (making Kain approximately 530 years old at the time). Raziel served Kain for "a millennium" (another 1000 years) before he was thrown into the Abyss and "centuries had apparently passed" before he returned to face Kain at the Pillars. The Blood Omen 2 Q&A

at GameSpot allows us to calculate it was another 500 years. Kain's age in Defiance cannot be accurately determined - especially as he had access to the Chronoplast and time travel - but 2030 seems a reasonable estimate, based on the available evidence.[13,14,15,16,17,18,19]

The Heart of Darkness was stolen from Janos and returned to him five hundred years later. However, as it had been in Kain for his vampiric lifetime, Janos' heart was significantly older than the rest of him when he got it back.[15]