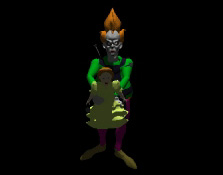 Elzevir the Dollmaker appeared in Blood Omen. He was gnome-like in appearance, and a minor magician 'of little note and origin'.[1]

When King Ottmar announced a dollmaking competition to celebrate his daughter's birthday, Elzevir produced the finest one of all. Out of the hundreds presented to the king and the Princess of Willendorf, Elzevir's was "of such beauty that all were captivated by it". He did not accept the "royal favor" offered as the prize, instead he took a lock of the princess' hair. Soon afterwards the princess became a "lifeless puppet", and Ottmar was distraught. Elzevir had stolen her soul, using her hair to seal the spell.[1,2]

Elzevir's dolls were effigies, intended to represent a specific person. He would obtain a personal item that he could attach to the effigy, physically and magically linking his doll with the person he wished to have power over. He had crudely fashioned a second doll - an ugly rag doll of burlap and silk - and nailed the princess' hair to it. This allowed him to 'draw her soul into the effigy'. The 'Character Biographies' page of the Silicon Knights Blood Omen FAQ says that Elzevir was 'a collector of souls' and he had 'collected many and varied souls for his own twisted reasons'.[1,3] 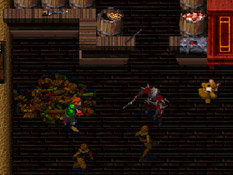 Some time later, Kain visited Willendorf. He knew from Ariel and the Oracle of Nosgoth that Willendorf's army was the last hope of Nosgoth; the only force that could perhaps stop the Legions of the Nemesis. Ottmar offered the kingdom - and, by association, the army - to whomever restored the princess to her former self. Kain took up the offer, deciding to kill the Dollmaker and return the princess' soul. He found and entered Elzevir's workshop. After working his way through the large building, he located the Dollmaker. Elzevir guessed that Kain had been sent by Ottmar, and apparently recognized that Kain was a vampire, saying "I can smell [Ottmar] on you - or is that the stench of the grave?".[2,4.5,6] 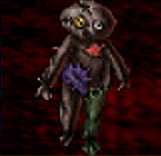 Elzevir did not want to give up the doll that held the spirit of the princess. He seemed childishly possessive of it, loudly proclaiming "The soul is mine, I earned it, Ottmar gave it to me!" and "You shall not have it! Mine! Mine! Mine!". Kain and Elzevir fought, although Elzevir relied on his toys to do most of the attacking while he paced back and forth across the room, occasionally throwing long, large, sewing needles. He had four 'Humanoid' rag dolls helping him from the outset, and if Kain destroyed any of these, Elzevir would touch the pile of rags in the room when he was near it, and cause new rag dolls to come to life. If Kain hit Elzevir himself, the cupboard door would open and a Teddy Bear would come out to join in the battle.[7,8]

Realizing that he was losing the fight, Elzevir mournfully said "Farewell, my love... I was lucky to have made you...". He was presumably referring to the doll that held the princess' soul. Kain eventually beheaded Elzevir, and entered (what appeared to be) the Dollmaker's bedroom. He found the doll in there. Kain collected it, acknowledging that he would never know what the "old man's intentions" were, and possibly refusing to think about it further. The idea of Elzevir coveting the young princess' soul is an uncomfortable one, no matter how innocent his infatuation may or may not have been.[7,9]

Kain took the doll and Elzevir's head back to King Ottmar, and thus gained an army who would fight against the Legions of the Nemesis.[10,11]