The Tomb of the Sarafan

The Tomb of the Sarafan appeared in Soul Reaver. It was the burial place for a select few of the vampire-hunting Sarafan order. 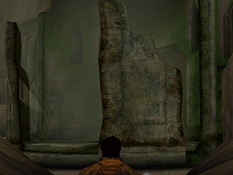 Raziel finds the the Tomb of the Sarafan

When Raziel first saw the Sanctuary of the Clans, having returned from his execution in the Abyss, he was nearly knocked of his feet when the ground suddenly shook. The Elder God explained that the earthquake was a result of "Kain's parasitic empire", and Kain's refusal to sacrifice himself to restore Nosgoth's balance. The Elder God said that Nosgoth was "wracked with cataclysms"; the world was "on the brink of collapse".[1] 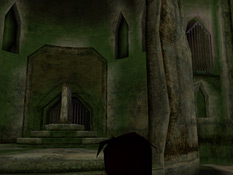 The entrance to the Tomb of the Sarafan

After killing Zephon, Raziel was directed to "the mountains beyond the Pillars" by the Elder God. There, Raziel was told he would find "an ancient crime" had been exposed by the cataclysms. Raziel passed through the Sanctuary of the Clans, and into the canyons beyond. He found a large structure built into the canyon wall, which he recognised as the Tomb of the Sarafan.[2,3]

Approaching the tomb, he commented on the men it had been built for. Retaining his old vampiric viewpoints, Raziel referred to the Sarafan as murderers, who "committed unspeakable and indiscriminate acts of violence". The place had been "impenetrably sealed" but now "ravaged by Nosgoth's upheavals, its mysteries lay exposed." Raziel was soon to learn that the tomb had actually been breached at least once, centuries before, by Kain.[3] 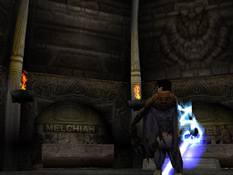 Raziel learns of his Sarafan past in the tomb

Raziel was not prepared for the revelation awaiting him within. The ornate inner chamber of the tomb was empty, but carved above the vacant caskets were the names of Raziel's brethren and his own. All six of Kain's vampire lieutenants: Raziel, Turel, Dumah, Rahab, Zephon and Melchiah had been Sarafan in life.[3]

Raziel was forced to re-evaluate himself and his opinion of the Sarafan crusade. If it were possible, his anger towards Kain grew as a result of this discovery. Raziel was disgusted by Kain's intentional blasphemy in raising vampire-hunting warrior-priests from the dead to serve him.[3]

Raziel continued through the tomb to reach the Drowned Abbey. He had been shaken enough by his discovery to bring it up when he confronted Rahab there. Rahab, however, didn't think it was important.[4]

By the time Raziel followed Kain through the Chronoplast's portal, at the end of Soul Reaver, he was speaking of the Sarafan with some reverence. His new, rose-tinted opinion of the Sarafan continued through most of Soul Reaver 2, although, having travelled back in time to the height of the Vampire Purge, he found the "orderly ruthlessness" of the Sarafan kills "chilling". He once again "beheld the monstrousness of these men". Raziel's favourable view of the Sarafan was waning, but it took the murder of Janos Audron to make him discard it entirely.[5,6,7]

The humans Raziel, Turel, Dumah, Rahab, Zephon and Melchiah had not merely been Sarafan; they were the elite of the Sarafan order, five hundred years before the events of Blood Omen. The Soul Reaver 2 Dark Chronicle identifies the human Raziel as the head 'Sarafan Inquisitor'. Raziel witnessed his Sarafan self lead Turel, Dumah, Zephon and Melchiah into Janos' Retreat and kill Janos. Raziel reverted back to his old hatred of the Sarafan, but that hatred was intensified by personal grief and guilt.[8,9]

Intending to avenge Janos, as well as retrieve the Heart of Darkness and the Reaver they had stolen, Raziel hunted and killed the Sarafan in the Sarafan Stronghold. He revelled in the knowledge of what Kain would do to them. Raziel was putting them in the Tomb of the Sarafan to await Kain's arrival, around a thousand years later. As Raziel killed his Sarafan self, he renounced his human life and history forever.[10,11,12]

Besides the revelation of Raziel's past, the Tomb of the Sarafan was a notable location in Soul Reaver for two other reasons. It was where Raziel faced the Tomb Guardian, and gained the Telekinetic Force Projectile ability. Also, there were seven names inscribed in the tomb, not six. Malek had a place too, although there was no casket for him, and we know from Blood Omen that his body never made it there. This suggests that the tomb was constructed - and at least Malek's name was carved - prior to the day when Vorador attacked the Circle of Nine (the same day Raziel killed the Sarafan who would become Kain's lieutenants, including himself).