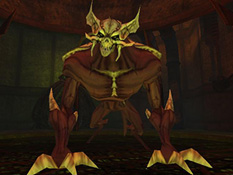 The demonic-looking Beast (Janos Audron) imprisoned within the Device

The Beast was a character in Blood Omen 2. It was actually Janos Audron in a devolved form.[1]

In Blood Omen 2, Kain was teleported to the Device by the Seer. It was his first time there, and he only explored a short way inside. Very quickly, he found a room that was crucial to the Device's operation. Within this room, the Beast was kept captive.

The Beast was a huge, monstrous creature. It dragged itself to stand as Kain entered, but its weakness and pain were evident. It recognized Kain, but Kain could not recall having encountered anything like the Beast before. The Beast admitted that they had never met, but it continued to speak. It told Kain how its life energy was being drained to feed the machine; it looked like the components upon its back might have been there for that purpose. Wanting its freedom, the Beast provided Kain with a strategy to destroy the Device: if Kain could find the Builder of the Device, it said, then the Builder would aid him. Kain left for the Eternal Prison to find this individual.[2]

Kain returned, having consumed the blood of the Builder. The Beast could sense the change in Kain, and it told him what to do next. The blood Kain now carried within his veins would poison the living heart of the Device, a creature known as the Mass. Armed with this knowledge, Kain descended deeper into the machine. The Beast had warned him of the Hylden who worked within, but Kain managed to achieve his goal and kill the Mass. He returned to the Beast's chamber to find the creature very different in appearance.[3]

The Beast was gone. Instead, in its place crouched a winged humanoid. Janos stood and identified himself to Kain, confirming that he was in fact the same creature who had assisted him. The parasitic demands of the Device and the Mass on Janos' blood had starved him, causing his horrendous devolution. As the Mass died, Janos' body was allowed to restore itself to its natural form.[1,4]

Defiance shed some light on the events that led up to Janos' imprisonment in the Device, providing an explanation of how he got there. In Defiance, Raziel returned the Heart of Darkness to Janos, resurrecting him five hundred years after his murder in Soul Reaver 2. However, this was also the Blood Omen era, and when the fledgling vampire Kain refused to sacrifice himself, the Pillars of Nosgoth were all but destroyed. The resulting "breach through the dimensions" allowed the Hylden Lord to possess Janos, leaving him at the Hylden's mercy. The Hylden Lord mocked Raziel for his unwitting assistance in giving the Hylden "an incorruptible vessel" and "the blood of [their] ancient enemy". They had wanted both, and he had provided them in delivering Janos.[5,6]

It's a little strange that Janos' blood was needed feed the Mass. The Builder stated that the Mass could not withstand "pure blood from the elder races", and given this comment, it's odd that Janos' blood wasn't toxic to the creature. Being of an 'elder race' himself - one of the Ancient Vampires - it seems wrong that the Mass thrived on it. Perhaps "elder races" only referred to Hylden bloodlines, or, as Janos was afflicted with the Blood Curse, his blood could be considered impure.[7]