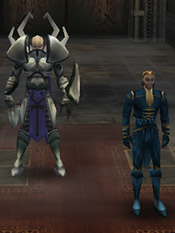 Artemis with his Sarafan Knight escort

Artemis was a "nobleman of some importance" who appeared briefly in Blood Omen 2. He arrived at the Sarafan Keep on some unknown business, and he was valuable enough to have a Sarafan Knight as an escort. He was distinctive because of his blue clothing, and he seemed to be blond, with a beard. His character model was not unique in the game, however.[1,2]

Kain was at the Sarafan Keep - there on a mission to rescue Umah - when Artemis visited. In the wealthy, opulent section of the Keep, Kain found a human woman who was a sympathizer of the Cabal. He needed her to open a Ward Gate for him, but she refused to do it until Kain murdered Artemis. She claimed that Artemis was a traitor, who had "done immeasurable harm to the Cabal". She wanted his "lying tongue" to be stopped, and even told Kain to "rip out his cruel heart". Although there was no conclusive evidence, it felt like the woman's intense loathing of Artemis may have been partly due to another, more personal grudge she had against him.[1,2,3]

Kain killed Artemis. If he approached him carefully, Kain could hear the nobleman's less-than-generous opinion of the artwork he was looking at. Also, while Artemis can be a male or female name, it is most famously the name of a Greek goddess. It seems likely this was the nobleman's surname, and not his forename.