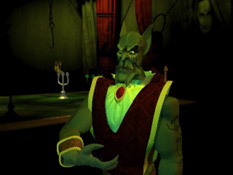 In Blood Omen, Vorador was the oldest and most powerful vampire Kain encountered in Nosgoth. Having lived since ancient times, his features had become inhuman over the long centuries of his unlife, and he was at least capable of changing form, and teleportation. He was arrogant and proud, with a penchant for torturing humans: a room in his mansion was devoted to it.[1,2]

Prima's Official Blood Omen Strategy Guide mentioned that Vorador had 'an excellent insight' into Nosgoth's history, gained by 'reading his victims' thoughts as he drained their blood'. The 'Character Biographies' page of the Silicon Knights Blood Omen FAQ says the same thing: that he had 'feasted upon the teeming human cattle of Nosgoth and learned everything there [was] to know about the world, reading his victims thoughts as he preyed upon their blood'. He had also lived long enough to personally see Nosgoth's transition from 'young and vibrant to sour and corrupt'.[3,1]

In Blood Omen, Kain needed to destroy Malek, so he sought Vorador on the advice of the Oracle of Nosgoth. Centuries earlier, Vorador had achieved a great victory over the Circle of Nine, killing six of their number and defeating Malek himself. This event was partially shown in Blood Omen's opening FMV (Full Motion Video). His assault had been an act of revenge; the Circle had created the Sarafan, and instigated and supported the Vampire Purge. The vampires were being annihilated by the Sarafan, and Vorador had suffered the loss of many he held dear. After his attack, Vorador distanced himself from the world of the living. He withdrew into his huge mansion, hidden deep within the Termogent Forest Swamp.[4,5,6,7,1] 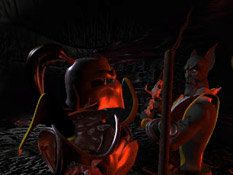 Kain entered Vorador's Mansion and commented on Vorador's "impressive" but "vulgar display of fortune". He found a variety of hostile creatures inside, but notably Kain encountered Vorador's Brides. Kain guessed these beautiful vampire women were simply Vorador's thralls: his "pets, nothing more than beasts". It seemed Vorador had ceased caring about anyone; he apparently had no emotional attachment to them, or any other inhabitant of the mansion Kain killed en route to meet him. Vorador welcomed Kain without any rebuke for his intrusion.[8]

Meeting Vorador this first time, Kain regarded him as a "decadent old fool" and he had little respect for him. Vorador believed that the curse of vampirism was also a blessing. It elevated them above the humans. This idea struck a chord with Kain. The fledgling vampire was slowly becoming more comfortable with the existence Mortanius had bestowed upon him. However, he also felt that Vorador had let his curse consume him; something that Kain was still trying to avoid. Vorador warmed to Kain, claiming to find him "amusing", and offered him the best advice he could: to stay out of human affairs. As Kain nodded in slight agreement, the older vampire presented him with his signet ring. It would allow Kain to summon Vorador's assistance if he was needed.[9]

At Dark Eden, Kain encountered Bane, DeJoule and Anarcrothe. Anarcrothe summoned Malek before he disappeared, and Kain countered by calling upon Vorador. Kain pursued Bane and DeJoule, leaving Vorador to deal with the Paladin. After an exchange of insults and blows, Vorador changed into his Wolf Form and leapt at Malek. By the time Kain returned, Malek had been defeated, and his armour was lying without animation on the ground.[10]

Kain continued his journey, falling unwittingly into the trap Moebius (as the Oracle of Nosgoth) had laid for him. Against Vorador's earlier counsel, Kain seized the opportunity to kill William the Just when it arose. This act stopped the boy king of the past becoming the Nemesis, altering the present that Kain knew, but not quite as he expected. He returned to find Moebius' citizen army on the verge of eliminating the entire vampire race. Kain was too late to prevent the final triumphant kill of Moebius' mob: Vorador was beheaded in front of a crowd of human spectators. With Vorador's death, Kain was the last vampire in Nosgoth.[11]

Shortly afterwards, when Kain refused to sacrifice himself to repair the Pillar of Balance, he came to accept Vorador's view of the vampires' superiority over humanity. Blood Omen's 'real' ending showed Kain's epiphany that "Vorador was correct" - vampires were "dark gods", whose duty it was "to thin the herd".[12]

Kain's decision gave the vampire race a chance to replenish itself. Kain established his empire, raising his lieutenants, and tales of Vorador passed into legend. As Kain's 'first-born', Raziel was aware of Vorador's reputation. After his fall from grace and transformation into a Reaver of Souls, those memories remained. Raziel mentioned Vorador once during his travels in Soul Reaver (referring to a period centuries before Kain's vampiric birth as the "the time of Vorador"), and Kain himself wore Vorador's old signet ring as an earring.[13] 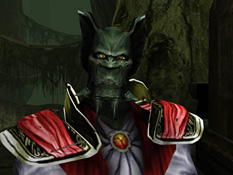 Vorador was waiting for Raziel outside of the Dark Forge

Following Kain through the Chronoplast, Raziel had a chance to explore Nosgoth, thirty years before the events of Blood Omen and Vorador's execution were due to take place. He saw murals in the Sarafan Stronghold that demonized Vorador, illustrating his attack on the Circle. Moebius hatefully referred to Vorador as "the scourge of the Circle" and "the most depraved and decadent example of his whole degenerate race".[14,15]

Early in Soul Reaver 2, Raziel felt that he was being watched. Large birds observed his route, but they dissipated into green smoke if he moved too close to them. Eventually Raziel reached the Termogent Forest Swamp, and spied Vorador on a balcony, still alive in that era. The mysterious birds were apparently his agents, and although the old vampire vanished, he was waiting to converse with Raziel once he exited the Dark Forge.[16,17]

Vorador was curious about Raziel, and appeared to recognize him in some way, although they had never met. Vorador questioned Raziel - particularly about the corruption of the Pillars - but he also gave some information away. He revealed that his maker had been none other than Janos Audron, and that Raziel's fate was somehow linked to that legendary vampire. But Vorador was fatalistic by this time: Janos had been dead for nearly five centuries, Moebius' citizen army already existed and he had written off Nosgoth as being beyond salvation. Reflecting on their conversation and Vorador's blunt and to-the-point approach, Raziel described Vorador as "the most forthright being [he] had encountered thus far".[18,19] 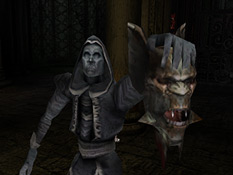 Raziel's first attempt to meet Janos was thwarted by Moebius sending him into Nosgoth's future, rather than its past. In the Sarafan Stronghold, a century after his execution in Blood Omen, Raziel saw Vorador's severed head (it looked like the genuine article) held aloft by a statue of the Time Streamer.[20]

Later in Soul Reaver 2, Raziel travelled back in time and was finally able to talk with Janos. Vorador was mentioned in their discussion: Janos said Vorador hated the humans because he had suffered much because of them, and could not forgive them. Janos was murdered shortly after, and Raziel returned to the Sarafan Stronghold to avenge him. While he was detained by Malek and Moebius, he heard Vorador's distinctive laughter and 'Call your dogs!' taunt coming from another part of the building. This was Vorador's famous attack on the Circle, and his motives for it were clarified by the timing; surely too perfect to be mere coincidence. Vorador had indeed lost many vampires he cared about to the Sarafan, but Janos' death was the final straw. His assault was direct retribution for the taking of Janos' life, and he made the Circle pay dearly for it.[21,22] 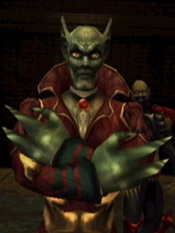 Vorador featured in Blood Omen 2. Through some means - as yet undisclosed by Crystal Dynamics

In Blood Omen 2 Vorador was the leader of the Cabal; a group of vampires and vampire-sympathisers trying to resist the rule of the Sarafan Lord. The Sarafan had controlled Nosgoth since Kain's defeat by the Lord two centuries earlier. Vorador was a patriarchal figure for the vampires of that era, the maker of many, if not all. They were all descended from him; Kain was the only exception. Vorador seemed to have embraced his role as "father of vampires", even if he dismissed the title and Kain's voiced respect of it as a "false courtesy".[23]

Vorador was very chastened in this fourth game; he had abandoned his sado-hedonistic lifestyle and mansion in the Termogent Forest, and instead resided with the Cabal in Sanctuary (a hidden location within Meridian). Umah, a member of the Cabal, was one of Vorador's favourites. More than any other, he appeared to care for her in a fatherly sense; she was his vampire daughter rather than his bride.[23]

Kain's destroyed army had been formed from Vorador's progeny, and Vorador had aided Kain's failed attempt to conquer Nosgoth. His motives for that were never fully revealed, but it's been suggested by fans that he owed his life to Kain. At the end of Blood Omen, Kain was still a fledgling vampire with limited understanding of his curse. He probably found himself needing Vorador's experience and ability to sire vampires, so he found a way to resurrect him. Whatever, Vorador's involvement seemed unusually pro-active compared to his disenchanted Blood Omen and Soul Reaver 2 incarnations.[23]

From their interactions, it appeared that Kain and Vorador neither particularly liked nor trusted one another, however Vorador had ensured that Kain was protected while he lay comatose, recovering from his battle with the Sarafan Lord. Once Kain awoke, they loosely allied again to destroy the Sarafan Lord; Vorador wanted to free the vampires from Sarafan persecution and ensure the race's survival, Kain wanted to rule Nosgoth. Vorador drew on his accumulated knowledge of Nosgoth to guide Kain throughout Meridian using the Whisper. At one point, he also sent Kain to the Seer. The Hylden woman owed him a favour, for unknown reasons.[23,24]

Vorador seemed to regard Kain as a more amoral creature than himself. He was aware than Kain was only aiding the Cabal to further his own agenda of revenge and gaining power. Kain did not have Vorador's strong loyalty to his own kind. Even so, when Vorador realized that Umah was dead, his first instinct was that Kain had been powerless to save her. When he learned the truth - that Kain had in fact killed her himself - he declared that Kain was a monster, although Kain claimed Vorador would have dealt with traitors in exactly the same way. Vorador arrived at the Hylden City with Janos Audron, but he did not take part in the fight against the Sarafan Lord. Presumably this was because he was injured by the Lord, but Kain did not see him again to argue the point.[25]

At present, there is no evidence of what happened to Vorador following the events of Blood Omen 2, however many fans suspect that Kain destroyed Vorador and the Cabal in the early stages of building his Soul Reaver-era empire. Soul Reaver's vampires were all descended from Kain, and Vorador was nowhere to be seen.