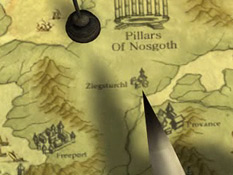 Freeport and Provance were two Nosgothic towns, introduced into the series by Blood Omen 2.

To date, neither town has been a playable location, but they featured briefly in the dream-sequence opening FMV (Full Motion Video) of Blood Omen 2. Both appeared on the map that traced the path of Kain's vampire army. Apparently the vampire army passed through and conquered Provance, and then Freeport, prior to their defeat by the Sarafan outside of Meridian.[1]