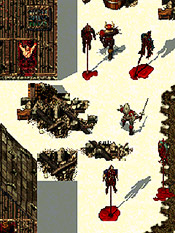 Stahlberg's population had been massacred

Stahlberg was a city located in eastern Nosgoth, to the south of William the Just's castle. It was an academic centre, once housing "some of the most prestigious universities in all of Nosgoth".[1]

Kain visited Stahlberg twice during Blood Omen. When Kain reached it the first time, the city had been devastated by the Legions of the Nemesis. Over the years of his reign, William had become the tyrant known as the Nemesis, and he had unleashed his troops on the rest of Nosgoth, hoping to conquer it all. The Nemesis was not kind to those who opposed him; in Stahlberg, the citizens had been brutally slaughtered. Many were impaled and left to rot on poles in the street, surrounded by pools of coagulated blood.[2]

Following Kain's trip into the past, and his murder of William, Kain returned to Stahlberg. The city was untouched and intact. However, as Kain left Stahlberg, heading south, he caught the scent of blood: vampire blood from the nearby execution ground of Moebius' citizen army.[3]