The Vampire Hero and the Adversary (Hylden) Hero 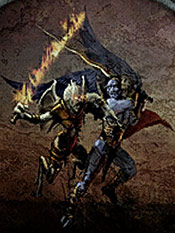 The Vampire and Hylden heroes battling

The Vampire Hero and the Adversary (Hylden) Hero were first mentioned in Defiance. Kain and Raziel found murals that depicted a confrontation between a champion of the Ancient Vampires and a champion of the Hylden.

One mural, seen in the Air Forge and the Water Forge, showed them both locked in battle. Two other murals - seen in the Air Forge, the Vampire Citadel and finally in the Spirit Forge - were thematically a matched pair, and illustrated the possible outcomes of their fight. In one, the Vampire hero was defeated. In the other, he triumphed over his Hylden adversary. In the murals, the Vampire hero was shown with the classic features of their race (black wings and blue skin) and he was wielding the Reaver. The Hylden champion was depicted as having "flaming eyes, and a fiery sword".[1]

In Soul Reaver 2, Janos tried to give Raziel the Reaver, and when it was stolen, Janos urged him to reclaim it, saying it was forged for Raziel alone. In Defiance, this caused Raziel to identify with the Vampires' hero who was shown holding the Reaver in a Dark Forge mural. But Raziel was confused: if he was this prophesied hero, why had the Reaver tried to consume him (at the end of Soul Reaver 2)?[2,3] 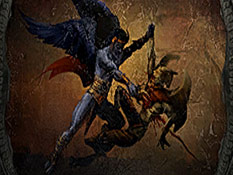 Raziel's doubts grew as he learned that the Hylden also had a hero, and the "resemblance [Raziel] bore to the adversary" - with his glowing 'eyes' and wraith-blade - "mocked all [his] hopes." He wondered if Kain, and not himself, had actually "been the Vampire hero of prophecy all along". Kain didn't look much like the image of the Vampire hero, but at least he was a vampire, and carried the Reaver. Although Raziel had actively pursued a confrontation with Kain in Soul Reaver, he had since put his quest for vengeance aside, focussing instead on seeking answers about his destiny. The murals of the Vampire and Hylden heroes suggested to Raziel that a final battle between himself and Kain was inevitable, and one of them would be destroyed.[1] 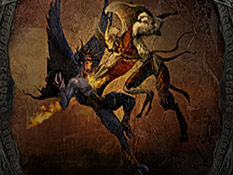 Moebius told Kain that Raziel was destined to kill Kain, regardless of Raziel's free will. Kain asked for proof, and Moebius directed him to the Vampire Citadel to find "a testament written in stone". Kain knew he was the Scion of Balance - a heroic figure in Vampire prophecy - and when he saw a mural of the heroes (the one where the Vampire hero was slain), he interpreted it as the evidence Moebius wished him to have. The Vampires "had prophesied not one, but two champions - one destined to be Nosgoth's redeemer, the other its destroyer". Kain later found the murals which illustrated both outcomes of the heroes' fight. He was suspicious, and wondered what Moebius "was trying to concoct", but the idea that the hero images represented himself and Raziel had crossed his mind.[4,5,6,7]

By the time Kain and Raziel met in Avernus Cathedral, Raziel had decided he was definately the Hylden hero, and Kain was his Vampire counterpart. He had come to this conclusion after exploring the Avernus Catacombs and meeting Mortanius. In the catacombs there were murals that showed the Hylden "opposed the Vampires' god" - the Elder God - "and refused to submit to the Wheel of Fate". Considering his own conflict with the Elder, Raziel mused that his "resemblance to the Vampires' enemy no longer seemed so accidental". Looking at an image of the Hylden 'Messiah', Raziel questioned what was going on, why "every player on the board claimed the same pawn": him. In Soul Reaver 2, Janos had certainly thought Raziel was on the Vampires' side, possibly a messiah figure for them. How could he be both? The Elder God spoke to Raziel for the first time since Raziel escaped from the Spectral Realm to state that Raziel had never been the Vampires' champion. He belonged to the Hylden race. The Elder God's assertion was supported by Mortanius, soon afterwards. Mortanius told Raziel he had "created the champion foretold by [his] masters" - Kain, the Scion of Balance - who was destined to be Raziel's destroyer.[8,9,10,11,12]

Kain encountered Raziel exiting the Avernus Catacombs. Kain tried to avoid fighting Raziel, but Raziel was enraged rather than placated by Kain's attempts to reason with him. Raziel was fearful of the Reaver, sick of being manipulated by Kain, and believed their battle was destined. Also, Raziel knew that the Heart of Darkness - which he needed to resurrect Janos - was in Kain. They clashed, and Raziel won; he thrust his claws into Kain's chest and wrenched Kain's heart out.[12,13,14,15]

In Vorador's Mansion Moebius congratulated Raziel on his victory over Kain. The Time Streamer said that it did not matter which hero - Vampire or Hylden - Kain and Raziel convinced themselves they were, as long as the outcome was the same: that they would fight and Kain would die. Clearly Raziel's interpretation of the heroes prophecy wasn't as certain as he had thought, and been led to believe. Mortanius, therefore, had also been mistaken.[16] 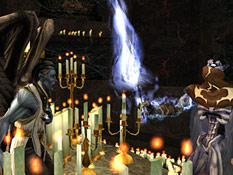 Raziel resurrected Janos, and pressed him for an explanation. He said he was not who Janos thought he was. Janos re-iterated his belief that Raziel was the saviour of the Vampires, so Raziel asked why they devised the Reaver to consume and imprison him. Raziel unsettled Janos further by showing him the wraith-blade; he already held the Reaver, but not in the way Janos had been expecting. Janos didn't abandon his faith in Raziel, however, he just wondered if he had misread all the signs. Janos teleported them both to the Vampire Citadel, and directed Raziel to the Spirit Forge. There was a trial awaiting him there, Janos said, and if Raziel prevailed, he would have his answers.[17,18]

Raziel activated the Spirit Forge despite the interference of the Elder God. Ariel, summoned to the forge to imbue the wraith-blade with Spirit, told him to 'unite what has been set asunder' to arm the Scion of Balance 'for his true endeavor'. Raziel didn't immediately understand this; after all, Kain was supposed to be dead.[19] 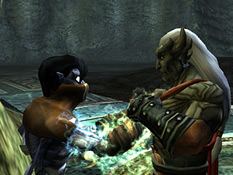 Kain survived the loss of the Heart of Darkness due to his nature as the Scion. He arrived at the Spirit Forge after Raziel's fight with the Hylden Lord had stranded Raziel there in the Spectral Realm. Kain killed Moebius, providing Raziel with the knowledge of Kain's continued existence, and a body to re-enter the Material Realm with. This prompted an epiphany in Raziel: he realised that he could enable Kain to see the Elder God. He could make a move that would end the conflict, strife, fear and hatred that kept souls "trapped in the pointless round of existence" feeding the Wheel of Fate.[20,21]

Raziel used Moebius' body to re-enter the Material Realm, and allowed himself to be drawn into the Reaver as Kain was healed of his corruption by the Spirit-imbued wraith-blade. In doing so, he simultanously fulfilled the prophecy shown by all the heroes murals. They didn't depict the fight between Kain and Raziel at Avernus; they depicted Raziel's sacrifice. Raziel was both heroes all along and Kain was neither. The Defiance team FAQ

Raziel's prophesized arrival is interpreted differently by the Hylden and Vampires, because of their different points of view. In Amy's words, "As the Hylden champion, he destroys the Vampire messiah with his fiery sword (the Reaver) by sacrificing himself. And as the Vampire hero, he vanquishes the Hylden savior, by obliterating him(self) with the Reaver." As the Hylden champion, he is able to bring about their "release" (in a sense) by bringing Janos back to life. As the Vampire Messiah, he purifies the Scion of Balance insuring that the pillars are once more in the possession of the Vampires. His ability to fulfill both prophesizes is because he alone possess free will and was able to make those choices.[22]

Ariel's statement that Raziel should "unite what has been set asunder" has been interpreted by fans to mean that the Ancient Vampires and the Hylden need to be reconciled for Kain to defeat the Elder God. This is supported by Raziel's desire to end the conflict, strife, fear and hatred that kept the Wheel of Fate turning. Otherwise, it could just mean he had to reunite the roles of Vampire and Hylden hero in himself through his sacrifice.[19,21]

The phrase 'Reedeemer and Destroyer' was used in Defiance to refer to the heroes individually. As the prophecy was presented from the viewpoint of the Ancient Vampires, the Vampire hero was the 'Reedemer', the Hylden hero was the 'Destroyer'. However, Moebius seemed to know the truth of the matter, as the first time the phrase appeared was in Soul Reaver/Soul Reaver 2, when he greeted Raziel in the Time Streaming Device.[23]

Vorador also appeared to understand something about Raziel's dual destiny. In Defiance, he wondered what side Raziel was on, and when Raziel asked why Vorador forged a weapon - the Reaver - to imprison the Vampires' supposed saviour, Vorador replied that Raziel had "chosen [his] path". Vorador knew that there was a choice for Raziel to make, and two paths he could take. He probably didn't realise that Raziel could fill both hero roles at the same time.[24]