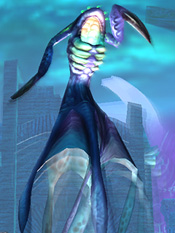 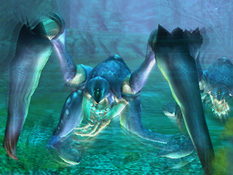 Archons appeared in Defiance as an advanced breed of predator in the Spectral Realm. These "mindless hunters" sought and fed on the lost souls of the Underworld, but they would also fight and consume Sluagh if the two species met. Like Raziel, they were agents of the Elder God, and as they devoured souls, they fed the Elder and the Wheel of Fate. Raziel first encountered them in the cemetery. Unhelpfully, defeated Archons simply vanished; Raziel could not feed on them at all.[1,2]

There were two types of Archon in the game. The first were the flying, shark-like 'Reaper Archons', and they swept through the air to catch souls or attack Raziel. They generally stayed aloft, and out of reach except by mid-air combos or telekinesis blasts.

The second type were the crab-like 'Dreadnaught Archons', and they remained grounded. However, they could fire projectiles of a sticky green goo that would temporarily trap Raziel and rapidly drain his soul energy. Like the Vampire Wraiths of Soul Reaver, all Archons could siphon Raziel's energy via a spirit-tether if they landed a physical blow on him. Raziel had to hit an Archon to break its tether, or increase the distance between them. If he got far enough away from the creature, the connection would be severed.[3]

The Archon type names appear in Prima's Official Defiance Strategy Guide, the only source for them, as far as this website is aware. It is also worth mentioning that the guide calls the Archons 'highly intelligent hunters'. This seems in marked contrast to Raziel's description of them, although Raziel might have intended "mindless" to mean 'unquestioning' rather than 'unintelligent'. It makes sense, as Raziel expressed the need to escape the Spectral Realm while he "still possessed [his] own will". The Archons were "a vision of what [Raziel] would become" if he did not escape: a creature existing only to fuel the Elder God with souls.[1,2,3]