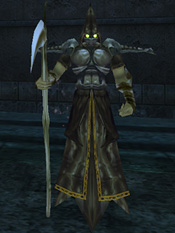 The Guardians were the wardens of the Eternal Prison

Kain encountered Prison Guardians in Blood Omen 2; they were the wardens of the Eternal Prison. The Guardians wielded scythes, and liked to 'talk big'. They teleported, and could also make themselves invisible (although their glowing green eyes remained visible, giving away their position). Perhaps their green eyes was a hint that they were in some way related to the Hylden.[1]

Kain was first confronted by a Guardian as he entered the Eternal Prison, at the start of his search for the Builder. The Guardian questioned Kain's reasons for being there. No visitors or guests were welcome, as it was feared they would disturb the "important work" the Guardians were involved in. He was ordered to leave immediately.[2]

The Prison Guardians' objective was to cause a "spiritual transformation" within the prisoners. This would show that the prisoners had "regained the balance of their true, perfect inner nature". The horrors of the Eternal Prison were supposed to encourage that outcome. Strangely - and somewhat contradictory - the Guardian claimed the prisoners' path to balance was through contemplating "the wrong that they have done, through peaceful, uninterrupted meditation".[2]

Kain ignored the warning, and continued to explore. The Guardian stopped him again shortly after, transporting him to another part of the prison in an attempt to contain and deter him. Kain returned without much trouble. He encountered the enraged Guardian on his way back, and defeated it in battle (or avoided it). After this fight, several Guardians attempted to kill Kain as he moved through the prison. However, he was not the only vampire disrupting their routine. Kain saw Magnus kill two Guardians when they stopped him chasing a human through the prison corridors.

Once Kain had spoken with the Builder and killed him, two Guardians accused him of ruining their "experiment". They believed he had upset their work to such an extent that the prisoners could never find redemption through their methods.[3]