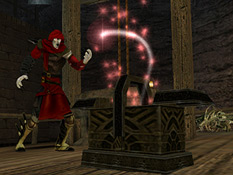 Lore was a gameplay device used in Blood Omen 2. Umah explained the concept behind it while she trained Kain in the Slums of Meridian.

Lore appeared to be a sort of life essence; a measure of a creature's vitality and how difficult they were to kill. As Kain drank the blood of his enemies, he could also absorb their Lore and add it to his own. The blood would sustain him, but the Lore would eventually make him stronger and harder to kill. Practically, this meant his blood vial would lengthen, and his body would retain more healing blood. He would be able to withstand more injuries before he was destroyed.[1]

Kain could only gain small amounts of Lore from the weaker, non-confrontational humans, but much more from stronger adversaries. Umah instructed him to "leave no enemy alive". Kain could also acquire Lore from Lore Coffers. These chests were described by Umah as relics of their vampiric ancestors (presumbly meaning the Ancients), and they were scattered throughout the game. Only vampires could open them. Coffers marked with blue circles held more Lore than those with red circles on them.[1,2]