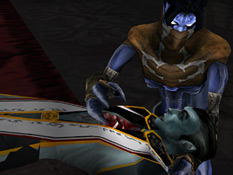 Raziel with Janos as Janos dies

Raziel imbued the wraith-blade with elemental Air, and activated the Time Streaming Device in the Termogent Forest Swamp. He found himself in an era where Janos still lived, and the Sarafan's 'Vampire Purge' was at its height - five centuries before the events of Blood Omen.

Raziel entered Janos' Retreat (still intact at that time), and Janos helped Raziel to understand his role in Nosgoth a little. However, they did not have long to discuss things. Unwittingly Raziel had led the Sarafan right to Janos. He was murdered, and Raziel was helpless to intervene as they stole Janos' heart and the Reaver (this was the blood-drinking, physical incarnation of the sword it had originally been, before it ever became the Soul Reaver).

Raziel's guilt and grief was increased by observing the one who committed the crime. It was himself, his former Sarafan self. Enraged and filled with self-loathing, Raziel pursued the Sarafan to the Sarafan Stronghold, intent on killing them all. He had one final meeting with the Elder God on his way back, where the Elder addressed Raziel with 'ominous finality'. Their 'partnership' had reached its end. Raziel now viewed the Elder as a parasite, another being who had seen him as a gullible tool to manipulate and use.

Raziel returned to the Sarafan Stronghold. He soon found the Reaver, conveniently left in his path. Raziel noted that he felt a nameless dread in the Reaver's presence (as he had at Janos' Retreat), yet no temporal distortion. As he considered this, he was cornered in the room by Moebius and Malek, and Moebius' Staff disabled his wraith-blade. Lacking another weapon, Raziel took up the Reaver, and the two Pillar Guardians departed. Apparently Moebius had just been waiting for him to seize the sword, and once he had taken it up, Raziel could not put it down again. It made him temporarily invincible.

Raziel used the Reaver to kill the Sarafan elite, those men who had also been his vampire brethren in Soul Reaver. He revelled in his newly-discovered role in their destinies. It was he who put them in the Tomb of the Sarafan, where Kain would find them and resurrect them a thousand years later. Raziel encountered his Sarafan self in the Stronghold's chapter house. Impaling the head Sarafan Inquisitor on the Reaver, Raziel renounced his Sarafan heritage once and for all.

As Raziel stood over his own corpse, the wraith-blade reappeared, and coiled down the length of the physical Reaver. He finally realized why he had felt fearful of the Reaver - it was destined to be his eternal prison. The barely-sentient soul-devouring entity that inhabited the Soul Reaver was, and always had been him. He was the deranged, captive spirit that had turned the Reaver into a soul-stealing weapon. The twinned wraith-blade and blood-drinking, physical Reaver turned on Raziel, trying to devour and draw him into the blade.

Kain rescued Raziel from this fate, causing yet another change in the path of history. He pulled the twinned wraith-blade and Reaver from Raziel's body, believing that would allow Raziel to reclaim his true destiny. But Raziel was not so sure. Falling into the Spectral Realm, exhausted, Raziel saw that his wraith-blade was still attached to his arm - irrefutable evidence that imprisonment within the sword was still in his future. He did not hear Kain's warning that Janos Audron must remain dead.

In Defiance, Kain attempted to find Raziel, without success. The only hint he could extract from Moebius was that Raziel was "contained", but in time, it could be safe to release him. He would enter the Reaver blade at some point. In fact, Raziel was detained in the Spectral Realm by the Elder God.

Raziel kneeling before the Elder God in Defiance

In the depths of the Underworld, Raziel was on his knees before the Elder God, weak and apparently at the point of starvation. He was still defiant; resolute in his opinion that the Elder was a parasite, and refusing to do its will. The Elder offered another, equally accurate reason for Raziel's stubbornness: he was afraid of returning to the Material Realm, where he would surely encounter the Reaver again.

Raziel eventually realized that it was "better to face one's destiny than cower from it". His current stalemate was "no worse" than being imprisoned in the Reaver. He submitted to the Elder God's will, and agreed to return to his role as the Elder's "harvester of souls", but as he said: "submission is not always what it seems." Raziel still hoped to understand and avoid his terrible fate, and he could not do that while stuck in the Underworld.

The Elder gave Raziel a soul to devour, and allowed him to start leaving the Underworld. The Elder blocked the exit of each new cavern, demanding a demonstration of Raziel's renewed loyalty before letting the wraith progress. As Raziel consumed souls, he fed the Elder and the Wheel of Fate. That was his "necessary and noble function". Finally, Raziel had to race up a tall cavern. It appeared to Raziel that the Elder may not have really wanted to let him go at all. The Elder God smashed walkways and vocally expressed its displeasure when Raziel escaped.

Raziel had won his freedom from the Elder God, but only to a point: The Elder would no longer provide planar portals for Raziel to use. He had to find some other way to exit the Spectral Realm. Raziel had emerged from the Underworld into a cemetery, and he found the means to physically manifest after a bit of exploration. He learned that he could project his soul into corpses, which would then reanimate. He could reshape these physical bodies to match his wraith appearance.

Raziel ran into some vampire hunters in the Cemetery. Their outfits (bearing Moebius' hourglass insignia) informed him that five hundred years had passed in the Material Realm since Kain saved him from the Reaver in Soul Reaver 2. They spoke of a ghost haunting the Pillars, prompting Raziel's decision to visit Ariel for guidance. However, he had to imbue the wraith-blade with elemental Light and Dark in order to depart from the graveyard.

Amongst the cemetery ruins, Raziel discovered Warp Gates that transported him to the Light and Dark forges of the Vampire Citadel. Using their elemental power, he enhanced the wraith-blade, and left for the Pillars, where he quickly added Fire to its list of imbuements. In the Fire Forge, Raziel learned that Vorador had forged the original, blood-drinking Reaver blade, so it was likely he would have knowledge that could save Raziel from it. Luckily, in this era - the Blood Omen era - Vorador was still alive. Raziel only had to find him before Moebius' vampire hunters did.

Raziel found Ariel at the Pillars as he expected. She was in the process of guiding the fledgling vampire Kain to purge the Circle of Nine. She didn't recognize Raziel, and seemed to think he was a Hylden - the first, but not the last person in Defiance to make that assumption. Raziel told her that her faith in Kain was misplaced, but she refused to listen. She did, however, tell him where Vorador's Mansion could be found when he asked.

The Vampire and Hylden heroes battling

Raziel next visited the Air Forge. There he was introduced to the prophesy of the Hylden champion. Based on what Janos had told him in Soul Reaver 2, Raziel assumed he was the Vampire champion depicted there and in the Dark Forge, destined to be the adversary of the Hylden champion. Later he would find out the truth was more complicated than that.

Raziel reached Vorador's Mansion, and after solving the puzzle of the Hylden gargoyles, he forged the wraith-blade with elemental Water. In the Water Forge, Raziel was faced with the horrible revelation that he was likely the Hylden champion, and Kain was therefore his Vampire adversary: the Vampire champion.

Opening the garden crypt of Vorador's Mansion, Raziel finally got to speak with the vampire himself. Unfortunately, Vorador said he could not help him, even if he had been motivated to. Vorador had no knowledge of the sorcery Janos Audron and the other Ancient Vampires had laid upon the Reaver once he had made it. To Raziel's surprise he suggested that Raziel should ask Janos instead, and led the wraith into an antechamber where Janos' body was kept. Raziel saw the body was intact, even though Janos had been murdered five hundred years previously. There was a very real possibility that Janos could still be resurrected, if Raziel could find the Heart of Darkness. Vorador directed him to Avernus Cathedral.