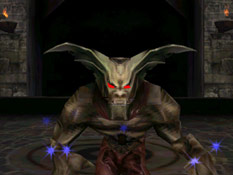 The Tomb Guardian (Morlock) was an adult member of the Turelim clan, charged with guarding part of the Tomb of the Sarafan. He was a Revived Vampire, so for a long period of his vampiric existence his body must have been inanimate. His soul must have wandered the Spectral Realm long enough to become a Vampire Wraith, before returning to his body. In the Material Realm, he retained the powerful soul-sucking ability he had gained as a wraith.

Raziel encountered the Tomb Guardian in Soul Reaver, shortly after discovering his Sarafan heritage within the tomb's main chamber. The Guardian was fairly arrogant, and confident that he could defeat Raziel. Raziel was unimpressed, saying that Kain had already killed him once. Of course, a Revived Vampire was not a threat compared to what Raziel had already faced.[1]

Raziel had not yet encountered any of the Rahabim, and the Tomb Guardian was the first Turelim vampire in the game. This made him the first enemy Raziel encountered with a projectile attack. However, the Guardian was overcome with little difficulty. After he had been destroyed, Raziel claimed an artefact that granted him the Telekinetic Force Projectile ability: the skill that the Guardian and the Turelim had presumably gained naturally through their evolution.[2]

The Tomb Guardian was likely guarding the Tomb of the Sarafan according to Kain's orders, rather than Turel's. Prima's Official Soul Reaver Strategy Guide calls the Turelim 'servants of Kain', and we know from Defiance that Turel disappeared from the Soul Reaver era at some point, and was taken back in time to the Blood Omen era. While the dialogue between Raziel and the Tomb Guardian could have been referring to Turel, the Guardian's initial accusation that Raziel was a heretic (remember: "Kain is deified") and the smooth change of focus to Kain ("Kain killed me once... I have no more to fear from you") suggests they were talking about Kain all along.[1,3,4]

Historically, the Tomb Guardian has often been mistaken for Turel, and on rare occasions, Malek. Raziel never met the evolved Turel in Soul Reaver (that confrontation eventually happened three games later, in Defiance), but players were expecting to fight all five of Raziel's vampire brothers. As the Tomb Guardian conversed with Raziel like the clan leaders did - and was the only ordinary vampire to do so - the misunderstanding came about. In fact, the Tomb Guardian's dialogue was an adapted version of the speech intended for Turel, before he was cut from Soul Reaver during the game's production. The confusion with Malek was due to Malek's name appearing in the Tomb of the Sarafan with no explanation of who he was. Only players of Blood Omen knew that history.[5]

The unofficial name for the Tomb Guardian, Morlock, is a holdover from Soul Reaver's production stages. 'Morlock Boss' was the development codename for Turel, and the Turelim were known as 'Morlock' vampires. The name stuck for this particular Turelim. Although it shouldn't really be considered as canon (that is, something officially confirmed in the games or by other sources) it is still almost universally accepted by fans. Official sources - including Prima's Official Soul Reaver Strategy Guide - just call him the 'Tomb Guardian'.[3,5]