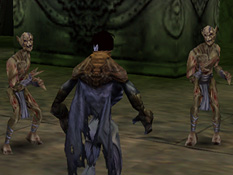 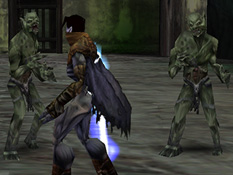 The Melchahim were one of the five vampire clans that appeared in Soul Reaver. They were the descendants of the lieutenant Melchiah.[1]

In Soul Reaver, Raziel first encountered the Melchiahim as he exited his desolate, former stronghold, and ventured into Melchiah's territory beyond (the Necropolis). In the centuries since his execution, the Melchahim had come to resemble zombies more than vampires. Raziel didn't recognise the Melchahim when he first saw them, although he realised their scent was vampiric. He spotted two adult Melchahim and watched as "these flayed wracks of flesh" killed a human and "gnawed upon their victim's carcass like dogs". When Raziel finally recognized the ghoulish Melchahim as Melchiah's descendants, he questioned whether the clan had resorted to raiding the graves of the Necropolis, recruiting fledglings from the long-buried and desiccated remains.[2,3,4] 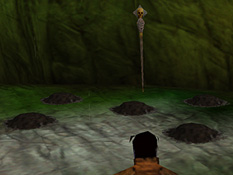 Finding an image of Melchiah carved upon a wall, Raziel reflected that - of Kain's six lieutenants - Melchiah "was made last, and therefore received the poorest portion of Kain's gift". Although Melchiah was immortal, "his soul could not sustain the flesh, which retained much of its previous human frailty". This weakness was apparently passed on to his vampire offspring, whose "fragile skins barely contained the underlying decay". The Melchahim flayed their human victims, using the human skins to replace their own, and 'help hold their own rotting carcasses together'.[5,6]

The Melchahim burrowed underground for periods of time to evolve. Patches of disturbed earth indicated the presence of hidden, pupating Melchahim vampires.[1]

Adult Melchiahim had a habit of diving and tunnelling underground in order to ambush their prey. They could travel very quickly this way. The Melchahim would descend into the earth in one place, and re-emerge some distance away. Additionally, the adults had green flesh; perhaps this was a sign of their bodies' prolonged and advanced decay. The flesh of the fledglings was not discoloured to the same extent.

As the descendants of Melchiah, the last of Kain's lieutenants, the Melchahim were the weakest of the clans and 'the lowest form of vampire' in Soul Reaver.[5,7]

Raziel was very critical of the idea that the Melchahim were resurrecting long-dead and buried corpses as vampires. This hints that the practice was anathema, or at least highly disapproved of in Kain's empire, before Raziel's execution. The implication is that - except on the rarest of occasions - only the newly-dead would be raised as vampires, having their souls stolen from the Underworld to reanimate their corpse.[4,8]

We know that individuals could be raised a long time after their death. Raziel himself is an example of this, having been resurrected by Kain from the Tomb of the Sarafan a thousand years after his death as a human. It makes Raziel's question: "To what depths had our dynasty plummeted..." seem a little hypocritical, although, to be fair, he didn't know the truth of his own origins then.[4,9]