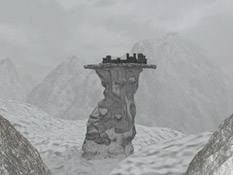 Malek's Bastion was a location in Blood Omen. It was the fortress of Malek the Paladin.[1] 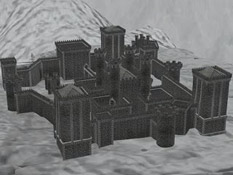 Malek's Bastion was a castle-like building

In Blood Omen, Malek was the protector of the Circle of Nine, as well as the Conflict Guardian. Kain knew that if he was to bring down the corrupt Circle, he would have to defeat Malek early on. Following his murder of Nupraptor, Kain travelled to Malek's Bastion to confront the Paladin, and "test the wrath of the Pillar of Conflict".[2,3]

Malek's Bastion was located on a high plateau within the snow-covered northern mountains of Nosgoth. It was a castle-like fortress, surrounded with snow and very difficult to reach. Visitors had to either teleport there or fly to it; Kain used his Bat Form. As the residence of the last Sarafan warrior-priest, the Bastion was a distinctly unwelcoming place for any vampire.[1,4] 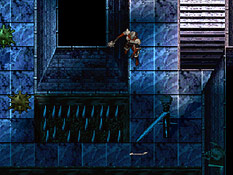 Not very homely - Malek's Bastion was full of spikes, blades and arrows

Kain said the Bastion's "interior was as cold and sterile as the snow outside, with empty suits of armour and sharp, cruel steel lining the walls." It was full of spikes, blades and arrows, and sustenance was incredibly scarce. Kain could not feed from Malek's soldiers; as they were mere wraiths of Sarafan warriors they had blue, spirit blood which would only restore his magical energy, not his health. These minions were produced by several mechanical generators within the Bastion.[5,6] 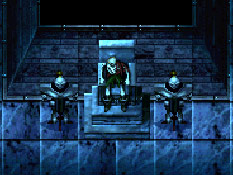 Just before Kain met the disembodied Conflict Guardian, he encountered a corpse, seated on a throne and flanked by suits of armour. Malek remarked that it had been a "sobering experience" to see his own corpse, but although he seemed to be claiming these remains were his, the body was clothed and looked fleshy. Blood Omen's opening FMV (Full Motion Video) showed that Malek's body had been left as a stripped skeleton by Mortanius' magic. Later, in the catacombs of Avernus Cathedral, Kain found a more convincing candidate for Malek's corpse. Prima's Official Blood Omen Strategy Guide actually refers to both sets of remains as Malek's.[7,8]

Kain fought against Malek, but the Paladin proved far too resilient for him. Finally, Malek unleashed a devastating wall-of-energy attack - according to Prima's Official Blood Omen Strategy Guide, he was trying to destroy the Bastion itself, as well as Kain - and Kain was forced to leave and think up a different way to overcome Malek.[8]