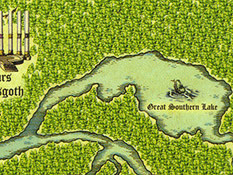 The Great Southern Lake - also just called the Southern Lake - was a large body of water located towards the south of Nosgoth, although still a fair bit north of Meridian. It featured on Blood Omen Maps of Nosgoth. It was also on the map that appeared in Blood Omen 2's dream-sequence FMV (Full Motion Video). It was a playable location in Soul Reaver 2.[1]

According to the Soul Reaver 2 in-game Map of Nosgoth, the Sarafan Stronghold was bordered by the lake on its north side. The map seems inaccurate in this respect, as Raziel could swim under part of the stronghold in the game. The stronghold was - at least partially - built in the waterfall-fed, fish-filled lake, and Raziel exited and re-entered the building several times by swimming through its huge, half-submerged doors. 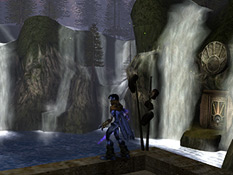 On one occasion, Raziel had to break through a thick layer of ice that covered the lake, using the Fire Reaver. Soul Reaver 2's Light Forge could be found on a bank of the Great Southern Lake, and some ancient ruins existed in its depths. These may have been the remains of the Spirit Forge, which never made it into the released version of Soul Reaver 2.[2]

The Great Southern Lake was connected to a number of rivers, streams and tributaries, as shown by the Blood Omen and Soul Reaver 2 maps of Nosgoth. Given their close proximity to the cemetery/Kain's Mausoleum and the Pillars, it's possible Raziel followed the route carved by one or more in Defiance, when he travelled between the two locations.