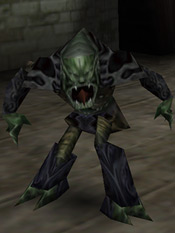 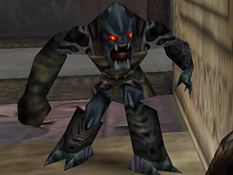 The Dumahim were one of the five vampire clans that appeared in Soul Reaver. They were the descendants of the lieutenant Dumah.[1]

When Raziel returned from his hellish execution in the Abyss, the first vampires he encountered were Dumahim fledglings. Raziel did not immediately recognize them; he called them "foul, scuttling beasts." He was shocked and disgusted to learn that they, like him, were descended from Kain.[2]

At the time of Raziel's execution, the vampires of Kain's empire still resembled humans. During his centuries-long absence, the clans had evolved far beyond what he remembered. The Dumahim had become heavily armoured. The fledglings appeared to have green skin on the faces and limbs, but the larger adults were blue-skinned. The Dumahim also had long lashing tongues that they could flick out at their enemies; powerful enough to injure Raziel, and probably capable of killing a human. The first fledglings Raziel saw seemed to be using their tongues like straws to siphon blood from a human corpse.[2,3]

The Dumahim were the most common vampires in Soul Reaver. The other clans - except the Turelim - generally kept to their own territories, but the Dumahim had spread out across Nosgoth. Raziel found that they had overrun his desolate former stronghold, amongst other places. When Raziel set out to find Dumah, he discovered the reason for their nomadic behaviour.[1]

Raziel visited the Ruined City of the Dumahim and saw that a massacre had taken place there, long ago. Dumahim corpses were in the courtyard and scattered throughout the city building, slowly decomposing to skeletal remains. Raziel suspected that Kain might have been responsible, but he was corrected by the Elder God. The devastation in the ruined city was Dumah's fault.[4]

Dumah and his clan had been too arrogant, failing to acknowledge the small threat posed to them by Nosgoth's humans. They paid a high price for their complacency: their territory had been attacked by human Vampire Hunters. The surprise attack had caused heavy losses to their number, and permanently incapacitated Dumah. Deprived of his leadership, those Dumahim who survived had been "reduced to scavengers".[4]

We saw in Soul Reaver how the Melchahim, the Zephonim and the Rahabim clans pupated and evolved, however we didn't see the method employed by the Dumahim (or the Turelim).

In Soul Reaver, vampires who had been 'killed' (defined here as separating their soul from their body) could be resurrected. As long as their soul had not been devoured by Raziel, Vampire Wraiths or Sluagh, their body remained intact in the Material Realm, and the soul could re-enter it if the cause of fatality (e.g. a spear) was removed. If the soul was consumed/destroyed, the body disintigrated completely. This suggests it was the soul that preserved the body somehow, even when the two were disconnected.

The corpses of the Dumahim in the Ruined City appear to contradict this convention. They looked decayed. Their presence suggested that the souls of the Dumahim still existed in the Spectral Realm, but the bodies weren't being preserved very well. Perhaps a vampire soul ceased to keep its body in good condition if the body was beyond repair?