The Lake of Tears 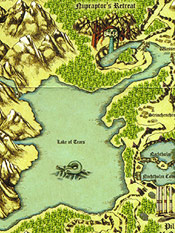 The Lake of Tears first featured in Blood Omen, and it was located to the west of the Pillars. It was largely unreachable in that game, and appeared to have no real significance. Maps of Nosgoth from the Blood Omen era showed that water flowed into the lake - via a fairly narrow river channel - from the waterfall of Nupraptor's Retreat.

Despite these dull first impressions, the Lake of Tears was notable to Blood Omen fans for another reason, provoking some discussion about it. On those same maps, there appeared to be a drawing of a sea serpent in the lake's centre. One suggestion was that it could be an indicator of local superstitions in Nosgoth, although no in-game reference to such a creature existed.

Now it seems that Defiance could offer a speculative explanation for this long-standing mystery. In Defiance, Moebius told Kain to "go west of the Pillars," to "find a testament written in stone." Kain explored the region around the Pillars, and set a fragment of the Balance Emblem in an obelisk there. The obelisk area overlooked a lake, and when he did this, "the mists that shrouded this lake miraculously now cleared away, revealing an ancient citadel." This was the Vampire Citadel.[1,2]

The Lake of Tears is the only lake known to be to the west of the Pillars. If the Vampire Citadel was located in the middle of it as the evidence suggests, the sea serpent image might make sense. It could be argued that a human map-maker (responsible for the Blood Omen era maps) would have no knowledge of the Citadel, but there was enough local legend to know that the lake was to be avoided. The serpent image could have been on the map to deter people from venturing into the lake, warning them that it was potentially dangerous to do so.