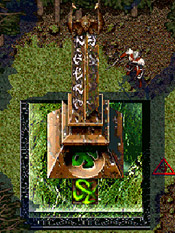 Bat Flight Beacons appeared in Blood Omen. When Kain gained the ability to assume Bat Form, he started to use the beacons as landmarks. They were easily visible from the air, and he could return to any he had discovered while travelling on foot. He only had to walk onto a beacon's platform to mark it as a possible bat-flight destination.[1]

There were many Bat Flight Beacons scattered across Nosgoth. Kain found the first just after he met Ariel at the Pillars. Most often they were located between the domiciles of Nosgoth's elite: King Ottmar, Vorador and members of the Circle of Nine. Their homes and fortresses stood out enough on their own, and Kain could fly to them without the aid of a beacon, once he had spotted them.

Bat Flight Beacons were regularly located off the main paths, so that was a good reason for Kain to explore Nosgoth thoroughly. Silicon Knights' Blood Omen FAQ included details about the Bat Flight Beacons, with one page giving directions to find them all.[2,3,4]