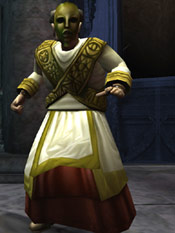 Cenobites appeared in Defiance. They were an order of priests who supported Azimuth's rule in Avernus.

The Cenobites provided 'basic law enforcement, health care and political representation'. They resided within Avernus Cathedral: the great cathedral in the heart of the city. Outwardly they were benevolent and caring towards Avernus' people, however this was a façade that hid their true depravity. Secretly they were involved in the worship of their blood god, Hash'ak'gik. They kidnapped travellers, and these unfortunate prisoners were ritually sacrificed to Hash'ak'gik to feed and appease him.[1]

It is unclear if the Cenobites ever completed the sacrifice themselves, or if they simply provided the offerings and Mortanius - or Azimuth - did the rest; Hash'ak'gik was used to receiving victims with their throats cut. Whatever, the Cenobites feared Hash'ak'gik's wrath if they didn't deliver. They were unaware that he was just a highly evolved vampire (Turel), and a prisoner in his pit. In serving Hash'ak'gik, they were really serving the Hylden that possessed him, and unless they got within range of his telekinesis - as Raziel did in Defiance - they were safe from him.

Cenobites were magic-users, wearing Greek-style tragedy masks and dressed in lavish cream, red and gold robes. Although there was no difference in their appearance, there were two distinct classes of Cenobite: Summoners and Acolytes. The more powerful Cenobite Summoners were full Cenobite priests, capable of conjuring up demons from the Demon Realm to fight on their behalf. This behaviour clearly mimicked Azimuth's in Blood Omen. They could protect themselves with Glyph Shields, and tended to hold back from physical confrontation, preferring to use a range of magic attacks from a distance. One of their spells was the projecting of 'elemental fire from the Demon Realm at their enemies'. The less powerful Cenobite Acolytes shared this fire ability, but relied equally on physical assaults; they would happily hit Raziel with an uppercut punch.[1]

The Cenobites did not appear in Blood Omen, at least not in their Defiance form. Instead, Avenus Cathedral was populated by 'Fire Mages' (as Prima's Official Blood Omen Strategy Guide calls them), but these enemies were fairly generic and appeared several times throughout the game. Demons were rife in Avernus, but it was not implied that the Fire Mages were summoning them; Kain credited Azimuth with that. It only appeared that there was a policy of co-existence between them: "the demons knew better than to bite the hand that feeds them".[2,3,4]