Defiance bridged the gap between Soul Reaver 2 and Blood Omen 2. It explained how Janos had been resurrected, and how he had become imprisoned by the Hylden. It also revealed another reason for his intense loathing of the Sarafan Lord - the only individual we've seen to inspire hostility in Janos, let alone hatred.

In Defiance, Raziel visited Vorador during the Blood Omen era. Raziel had learned that Vorador had forged the Reaver originally, and when asked about it, Vorador told Raziel he had crafted the sword, but only because Janos had asked him to. Vorador had his maker's body within his estate - presumably he had retrieved it personally from the ruins of Janos' Retreat. It was intact and free of decay, reverently laid upon a bier and surrounded by candles. Many times, Vorador had searched unsuccessfully for the Heart of Darkness, believing that if the heart was returned to Janos, there was a chance he would be restored. Vorador suggested that Raziel should travel to Avernus Cathedral to look for the heart himself. Janos would be the only individual capable of answering Raziel's questions about the Reaver's sorcery.[1] 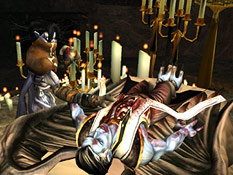 Raziel resurrects Janos with the Heart of Darkness

In the Avernus Catacombs, Raziel ran into Mortanius. The Necromancer explained that he had used the Heart of Darkness "to set prophecy in motion" - he had used it to resurrect the nobleman Kain as a vampire. Raziel suddenly realized that it was in Kain, and always had been. Armed with this knowledge, Raziel ripped the Heart of Darkness from the elder Kain's body when they fought at Avernus a little while later. He then returned to Vorador's estate and replaced the heart into Janos' open chest cavity.[2]

Janos revived. He remembered the events of Soul Reaver 2, and was shocked when Raziel told him that five centuries had passed since his murder. He inquired about Vorador, only to be told that Vorador was now dead, and all vampires were facing extinction. Raziel expressed his confusion about his role in the Ancient Vampires' prophecies, and why the Vampires would "devise a weapon to consume and imprison their savior". He showed Janos that he already wielded the Reaver, but as a wraith-blade rather than the physical sword he was meant to hold. Janos, although shaken by this, did not abandon his faith in Raziel. He only wondered if he may have misread the signs, and said that Raziel's destiny seemed "more labyrinthian" than he had realized.[3] 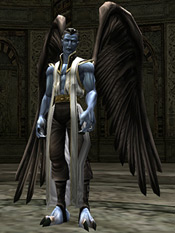 Janos in the Vampire Citadel

Janos teleported himself and Raziel to the Vampire Citadel. He heard the rumblings, and seeing the Pillars corrupted in the distance, he tried to hurry Raziel into action, understanding that time was short. The Binding was in peril, and the events foretold in the Vampires' old prophecies were coming to pass. Raziel would not allow himself to be ordered into action until Janos explained more about the Hylden, and the curse they had laid upon the winged Ancients.[4]

As Raziel had discovered earlier, it was the immortality, not the blood-thirst that had driven them to mass suicide. Their god - the Elder God - had abandoned them because of it. Those - like Janos - who did not take their own lives, accepted the horrifying curse and the act of passing it to humans as a "necessary evil", to keep the Hylden banished. Their bloodline had to be preserved - especially by passing the curse to the human Pillar Guardians - to maintain the Binding. Janos said centuries of a having a fully-human Guardian Circle had led to the Binding decaying, and the Hylden's current attempt to destroy it entirely. He directed Raziel to the Spirit Forge.[4]

Raziel imbued the wraith-blade with Spirit, and returned to the upper chamber of the Citadel where Janos was waiting, watching the Pillars. It was too late to do anything: at that moment, as in Blood Omen, the fledgling vampire Kain was at the Pillars. He was defeating the Dark Entity that had deformed and continued to animate Mortanius' corpse, and refusing to sacrifice himself for Nosgoth. At the instant of his fateful decision, the Pillars were struck by a cataclysmic explosion, like lightning, that obliterated the infinitely-high columns, leaving only broken stumps. The force of it was enough to make Raziel lose his footing, even that far away. As he stood up again, he saw that Janos had been affected much more by the event.[5,6] 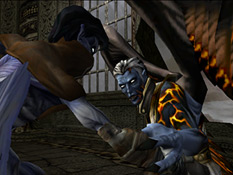 Janos asks Raziel to kill him

Janos had been possessed by the Dark Entity: the Hylden Lord. Kain had not killed him at the Pillars, rather he abandoned Mortanius' flesh in favour of Janos' - as a vampire, he was "an incorruptible vessel". Janos tried to fight the possession unsuccessfully, and the Hylden Lord gloated about his victory. He mocked Raziel for providing him with a new host, and for killing the Scion of Balance to do it. Janos briefly regained control of himself, just long enough to ask Raziel to kill him, and stop the Hylden's plan. The Hylden Lord then quashed Janos' resistance, and powerfully reasserted himself, but Raziel would not stand by and let him leave. He claimed he was willing to destroy Janos if he had to, so he and the Hylden Lord battled.[5]

The Hylden Lord exploited Janos' wings and telekinetic abilities, and caused Revenants to rise up and aid him. Raziel eventually defeated him, and he fell to the ground. For a few moments, the Hylden Lord's grasp on Janos faltered, and again the vampire begged Raziel to kill him, before the Hylden came back. Raziel couldn't bring himself to do it, and his inaction cost him dearly. The Hylden Lord returned, even stronger than before, and used magic to destroy Raziel's physical form and send him back to the Elder God. He then flew away, still in control of Janos' body. This set the scene for the events of Blood Omen 2.[7]

In Blood Omen 2, the Hylden Lord (the Sarafan Lord) was inhabiting his own body, brought into Nosgoth from the demon dimension, shortly after the Pillars' collapse. According to the second Defiance Q&A page

at The Lost Worlds, this had been achieved by using Janos' body to open the Hylden Gate. As he was no longer needed as a vessel, Janos was imprisoned in the Device to feed the Mass, and there he remained for around four hundred years, devolving into the Beast, until the younger Kain freed him.[8]

The Device was designed to destroy all creatures except the Hylden, so their intention to use it was probably the 'plan' Janos tried to warn Raziel about. This is supported by the Hylden Lord's comment that they "required the blood" of their "ancient enemy" to further their cause. Janos' was perfectly suitable. Adding vicious possession to the imprisonment Janos suffered at the hands of the Sarafan Lord, it's no surprise that he recklessly joined in the fight against him in Blood Omen 2. From his perspective, the Hylden Lord had caused him to destroy Raziel, the Vampire saviour whom Janos gave his life to protect in Soul Reaver 2.